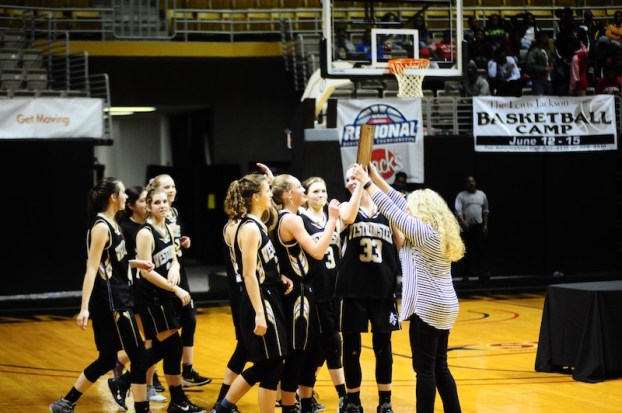 Westminster at Oak Mountain is headed to the Final 4 at the BJCC after taking down Loachapoke 51-40 thanks to hot shooting from three. (Reporter photo/Alec Etheredge)

MONTGOMERY – It’s been a year of firsts for the Westminster Lady Knights basketball squad. Their first area championship, first playoff appearance, first Sweet 16, first Elite 8 and now their first ever trip to the Final 4 awaits after they took down Loachapoka 51-40 on Tuesday, Feb. 21.

Westminster trailed at the end of every quarter besides the only one that mattered thanks to a 16-3 run in the final period of the game. The stat line shows the Knights shooting 36.5 percent for the game, but their accuracy on jump shots, specifically late in the game was impressive as they had several straight possessions without missing down the stretch.

It’s shown by their 3-point percentage which was an impressive 42.9 percent for the game.

The Lady Knights went into the final period down 37-35 but came out firing to start the final period knowing their season was on the line. While Morgan White had done the majority of Westminster’s scoring in the first three quarters with 20 of their 35 points, it was a team effort in the fourth.

On three of their first four possessions in the quarter, the Lady Knights hit a 3-pointer, two from Megan Gache and one from Macy Mixon to start the quarter on a 9-2 run and take a 44-39 lead. That’s all they needed as the defense, which Westminster is known for, stepped up limiting Loachapoke to just one point the remainder of the game.

In the first quarter of the game, Westminster made it known they would be shooting the ball often, but with White having all 10 of their points in the quarter it wasn’t clear if anybody else could step up.

Another dilemma for the Knights was Desiree Tyner of Loachapoke who is big bodied and caused problems for an undersized Westminster squad all afternoon. With her presence and the Lady Knights lack of help behind white, Loachapoke took a 13-10 lead after one.

It was much of the same early in the second quarter as White hit another 3-pointer to give her all 13 of her teams’ points as they trailed 15-13.

Finally, Gache hit a shot to show it could be more than just White’s show. Tyner was still causing problems for Westminster, however, as she helped her team to a 26-20 halftime lead. In the first half the stars for each team lit up the scoring column as Tyner had 14 and White had 13.

Loachapoke came out in the third quarter and continued to pound the ball inside as they extended their lead to 29-20. This is when Westminster caught fire and went on a 13-5 run behind several 3-pointers. The Lady Knights got as close as one at 34-33, but trailed 37-35 heading to the final period.

White led the Knights with 25 points while also grabbing six rebounds. Gache added five rebounds to her 11 points in the game. White was also named as the 1A girls central regional All-Tournament MVP, while Rachel Price was named to the All-Tournament team.

By GRAHAM BROOKS / Staff Writer MONTGOMERY–The Westminster Lady Knights have once again made history in the 2016-17 basketball season.... read more