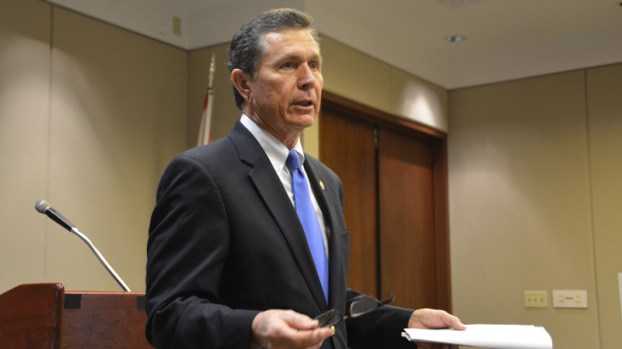 Gunter Guy, commissioner of the Alabama Department of Conservation and Natural Resources, was one of seven state officials to address attendees of the Montgomery Drive-In on Tuesday, Feb. 21. (REPORTER PHOTO/STEPHEN DAWKINS)

About 20 people rode a bus to Montgomery for a luncheon with the Shelby County legislative delegation and then presentations from seven state officials, including Bentley.

Bentley said Alabama’s General Fund and Education budgets are healthier than they have been at any time during his tenure, in part because of settlement money related to the BP oil spill and the taxation of online retailers.

“Congress wouldn’t do it so we’re doing it on the state level,” Bentley said about the taxation.

An ongoing problem in the state is the prison system, the governor said and added that any potential remedies are usually unpopular.

“It doesn’t get you any votes, but it sure causes problems if you don’t solve the problem,” Bentley said.

At the luncheon, Sen. Cam Ward said the current session of the Alabama Legislature, especially budgeting, will be interesting because many of the variables will be changed by what happens in Washington, D.C.

“It has created a kind of cloud over what we do with our budget,” Ward said.

Rep. Matt Fridy addressed the Shelby County group on the same day that he was announced as a member of a task force appointed by Bentley to study eliminating the state’s 4-percent tax on groceries and essential food products.

Fridy said he would prefer that the tax, if repealed, would not be replaced by another tax, and cited the approach as the kind of unorthodox thinking needed in state government.

“One of the things I wish we had more of in Montgomery is outside-the-box thinking,” Fridy said and added that elimination of the tax could result in more than $4 million annually circulated “back into the economy.”

Bentley said the tax cut is needed and would stimulate the state economy.

“We need to cut the cost of food in this state,” he said. “Everybody ought to be able to feed their family and get a job.”

Rep. Corley Ellis said the remainder of the Shelby County delegation would have liked to be in attendance.

“Everybody wanted to be here,” Ellis said. “We appreciate you guys taking time out of your busy schedules to be here.”

Others to address the Drive-In included:

•Gunter Guy, commissioner of the Alabama Department of Conservation and Natural Resources. Guy said ADCNR is partnering with Shelby County on improvements to Oak Mountain State Park, which he said drew more than 600,000 guests in 2016, an increase of more than 100,000 over 2015.

•Jim Byard, director of the Alabama Department of Economic and Community Affairs. Byard said Shelby County has received $1.6 million in Community Development Block Grant funds through ADECA since 2011. “I believe in local leadership, state partnership,” Byard said. “We’ve touched every life in Alabama whether you know it or not.”

•Clinton Carter, director of the Alabama Department of Finance. Carter said that while the state’s General Fund and Education budgets are at an all-time high, Medicare commitments and corrections eat up large chunks of the money. Carter advocated combining the state’s two budgets into one fund. “As bad as education needs money, frankly, the General Fund needs it worse,” he said. Carter, who is a member of the state’s gambling task force, also said that gambling could generate about $220 million revenue annually for the state but that 25 to 50 percent of the revenue would be expected to “go out the back door” in increased social services.

•Stephen McCormick, director of governmental affairs for the Alabama Department of Labor. McCormick said that while the Department of Labor cannot provide jobs directly, it has done “the next best thing” by hosting regional job fairs. “We’re putting a lot of people back to work doing that,” he said.

•John R. Cooper, director of the Alabama Department of Transportation. Cooper said that what was intended to be a $10 million project to replace the U.S. 31 bridge over Interstate 65 in Calera would actually cost about $17 million because of added lanes, acquiring rights-of-way, etc. Cooper said Alabama 119 in North Shelby County is the most heavily traveled four-lane road in the state and also talked about the limited options to alleviate traffic on U.S. 280.

•Greg Canfield, secretary of the Alabama Department of Commerce. Canfield talked about the differences between the Alabama economy of 50 years ago—which relied heavily on agriculture, timber and textile factories—and the state’s “booming” automotive industry and opportunities in aerospace and aviation and other technologies.

Pharmacist talks to students about dangers of drug abuse

NORTH SHELBY – Angela Blackwell has experienced the lows associated with drug abuse and wants to help others avoid them.... read more