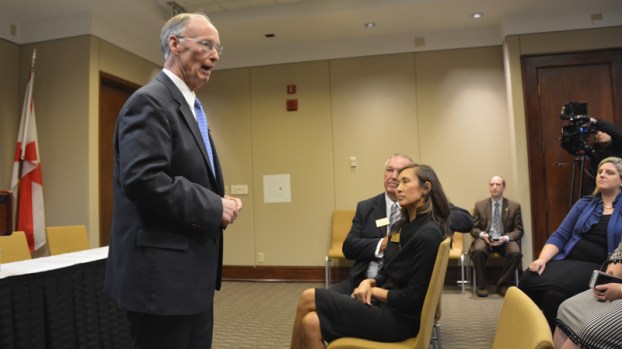 Governor, other state officials discuss I-65 widening in Shelby County

MONTGOMERY – The widening of a stretch of Interstate 65 in Shelby County was the most discussed topic as locals met with state officials on Tuesday, Feb. 21 as part of the annual Montgomery Drive-In.

About 20 people rode a bus to Montgomery for a luncheon with the Shelby County legislative delegation and then presentations from seven state officials, including Gov. Robert Bentley, who acknowledged the need for widening I-65 from four to six lanes from Pelham to Alabaster.

“It’s a real bottleneck,” Bentley said. “It’s one of the worst places in the state.”

Bentley said he has met with Alabama Department of Transportation Director John Cooper about the project and said construction work would at least begin by the time he leaves office in January 2019.

Cooper also addressed the group and said the stretch, which carries about 80,000 vehicles per day, is one of 10 in the state that needs widening.

Cooper said the project would cost about $60 million or $100 million if the Alabaster interchanges needed to be improved.

During the Drive-In, state Sen. Cam Ward said the status of the project “depends on who you ask” because of the unknown fate of a national infrastructure stimulus touted by President Donald Trump.

While state leaders would like to use federal grants to help pay for such an extensive project, Ward cautioned that he thinks Congress will be hesitant to fund such a plan.

“I wish I could tell you we will have the money tomorrow, but I can’t tell you that,” Bentley said.

The next phase of the widening plan calls for I-65 to be expanded to six lanes between Exit 238 in Alabaster—which is the Propst Promenade shopping center exit—and Exit 242 in Pelham—which is the tank farm exit.

Ward previously said that once construction begins, it will likely take about one year to complete.

In November 2015, ALDOT published its five-year plan outlining several road projects it plans to complete over the next few fiscal years. While several Shelby County projects were on the list, the I-65 widening project was not budgeted until 2020.

After seeing the plan, Alabaster leaders contacted local legislators, who brought the matter to Bentley’s attention

“Today, I have ordered the Alabama Department of Transportation to place the Shelby Co. I-65 project back on the 5 year plan. There will be no delay,” Bentley posted on Twitter on Dec. 8, 2015.

Traffic often bottlenecks, particularly during the morning and evening rush hours, near exit 242 where the interstate narrows from six lanes to four lanes.