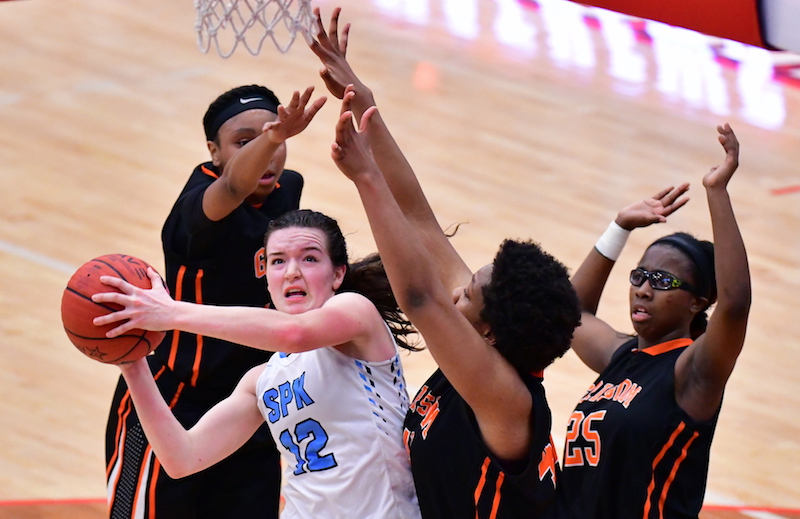 Claire Holt drives through three Grissom defenders on her way to two of her game-high 32 points as she led the Jags in an Elite 8 win over the Tigers. (For the Reporter/Ted Melton)

The game got close on several different occasions in the second half, but every time the Tigers made a run it seemed like Spain Park answered with a 3-pointer to crush Grissom’s momentum. For the day Spain Park hit 10 of their 26 3-pointers, several of which came in the biggest of moments.

Early in the game, Spain Park’s offense could be described with one name, Claire Holt.

Spain Park fell behind 3-0 in the first 30 seconds thanks to a Briana Moore 3-pointer, but Holt answered with a three on the Jags ensuing possession off of a Sarah Ashlee Barker assist to tie it up.

The two teams traded layups to tie it up at five before another Holt three sparked a Spain Park 13-4 run to end the first quarter as they took an 18-9 lead after one. Holt hit four 3-pointers and had 14 points in the first quarter.

Both teams came out and traded shots in the first three minutes of the second quarter, but another Holt bomb from beyond the arc at the 5:12 mark extended the Spain Park lead to 10 at 25-15.

Over the next 3:30 of the game things slowed down as one basket was made by Grissom’s Arianna Powe. Finally, Holt remembered she was a ball of fire and drained another 3-pointer to give the Jags their largest lead of the day at 28-17.

Grissom ended the quarter on a 6-2 run to trim the lead to 30-23 at the break to remain within striking distance going to the second half. At the half, Holt had 22 of Spain Park’s 30 points while shooting 7-15 from the floor including 6-9 from deep.

Spain Park came out and started the third quarter on another run, this time outscoring the Tigers 7-1 over the first three minutes thanks to a couple of offensive rebounds and put backs by Barrett Herring.

Grissom was forced to take a timeout after the Jags had built up their largest lead of the game of 13 at 37-24. Coming out of the timeout, the Tigers went on a quick 5-0 run in 30 seconds and proceeded to end the quarter on a 14-4 run to get within three at 41-38 heading to the final period.

Holt was limited to just three points in the third after going for 22 in the first half, which meant somebody else needed to step up.

That somebody else came in the form of Bailey Bowers who hit two 3-pointers early in the quarter to help the Jags get off to a 7-2 run in the quarter as they extended the lead to 48-40. Katelyn Walsh hit another three shortly after to extend the lead to nine with three minutes to play.

Grissom got it to as close as 51-46 with 2:14 to play, but Spain Park, who struggled from the free throw line most of the day, stepped up and made several free throws over the last couple of minutes to end the game on a 9-0 run and win by the final of 60-46.

Holt was the only Jags’ player to reach double figures in any statistical category during the game. She had 32 points after shooting 8-20 from the field, 6-9 from three and 10-13 from the free throw line. The junior also added 10 rebounds for double-double performance.