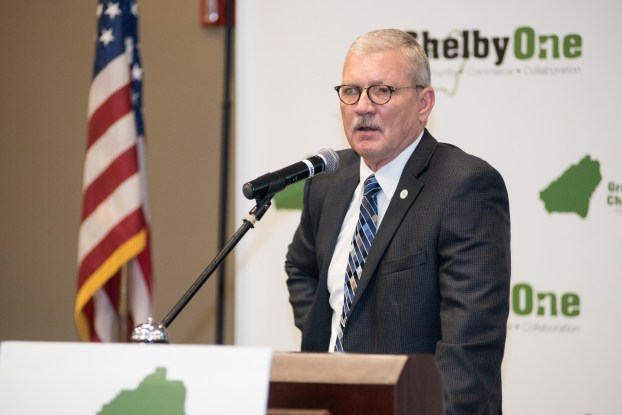 Mayors give “State of our Communities” addresses

PELHAM – The mayors of 11 Shelby County municipalities gathered Wednesday, Feb. 22, at the Greater Shelby County Chamber of Commerce’s State of our Communities luncheon to talk about what’s happening in their respective cities.

As each city leader spoke, they highlighted the good things happening in their city as well as some of the challenges they face. The event was held at the Pelham Civic Complex and Ice Arena.

Here’s what each mayor had to say:

Marty Handlon, mayor of Alabaster
-One of the things Handlon said she is most proud of is the city’s comprehensive plan, which lays out a 10-20 year plan for Alabaster’s growth and development. The city received a national award, the 2016 Outstanding Planning Award, from the American Planning Association for their comprehensive plan.
Handlon also highlighted the construction of the city’s new high school, which is under construction and is expected to open to students in the fall of 2017, and the upcoming opening of Taziki’s in the recently constructed Alabaster Landing development next to Shelby Baptist Medical Center.
Moving forward, Handlon said a challenge for the city is having a lot of old infrastructure that has not kept up with the growth of the city. She said the city’s goal is to balance improving roads and sewers while maintaining quality the of life aspects that residents want.

Jon Graham, mayor of Calera
-“I’m going to be real short, everything is good in Calera,” Graham said, drawing laughter from the audience.
In the month of January, the city installed 17 new water meters, which is an indication that the city’s housing market is doing well, Graham said. He said the city is also set to get a new Chick-Fil-A and recently recruited the only RV dealer in Alabama that sells products made exclusively in Alabama.
Graham said the city’s parks and recreation department is also growing. The city soccer league has grown from 160 participants last year to 240 this year.
A challenge for the city continues to be the effort to get the overpass on U.S. 31 over Interstate 65 widened to accommodate traffic congestion.

Tony Picklesimer, mayor of Chelsea
-Picklesimer said Chelsea’s housing market is booming. The city recently approved three separate residential housing developments in the city, which boasts an average household income of about $80,000 per year.
A 21-classroom addition to Chelsea High School is also in the works. Picklesimer said his goal is to always be proactive when it comes to working with Shelby County Schools to find new ways to fund school projects in the city.
Challenges for the city include managing the city’s growth.
“We’re approaching a population of 13,000 in a city with infrastructure meant for 5,000 people,” he said. “I witness multiple traffic jams per day from my office window.”

Stancil Handley, mayor of Columbiana
-The city of Columbiana recently completed its comprehensive plan. Handley said the last comprehensive plan was about 25 years old. The city is preparing to redo their sewer system. Handley said bids for the project are now being accepted. In June the city will host the National Senior Games’ cycling competition and will soon be the home of the Columbiana Outlaws, an arena football team.
The city is also working with the Alabama Department of Economic and Community Affairs to construct a 5-mile hiking, biking and golf cart trail connecting the city with Shelby Iron Works.

Don Greene, mayor of Harpersville
-Home to a drive-in movie theater and with 11 churches located inside the city limits, Greene highlighted Harpersville’s small-town charm. He was pleased to announce that the city’s golf course, which has been vacant for a few years, was recently leased. Greene said the city will not have any involvement in the golf course, but will collect rent from it. Upcoming projects include building a community center and upgrading the city’s water system.

Mark Hall, mayor of Helena
-With a population of about 18,000 Hall said the city is working to control its growth. The city’s Standard and Poor’s rating has increased from an A- to AA, about a four-point increase that Hall said he is proud of. Hall said the city is working to add more miles to its trails system and recently replaced a lot of its aging vehicles for their police and fire departments.
Attracting new businesses is always a goal, but Hall said Helena only wants businesses that are a good fit for the city.
“We don’t want just any business,” he said.
Beef O’ Brady’s and a new breakfast restaurant will soon be opening in the city.

Frank Brocato, mayor of Hoover
-Brocato said he believes the strength of a city lies in its school system. For that reason, the city allocated $5 million to Hoover City Schools, doubling the amount of money the previous administration was giving to the city, Brocato said.
Brocato described the city as a retail economic engine and said the city is looking to hire an economic developer to continue propelling the city forward. He also highlighted the city’s nearly $80 million sports complex that is under construction and is expected to be completed this year. The 155,000-square-foot event center will be built in time for the 2017 SEC Baseball Tournament in May.

Hollie Cost, mayor of Montevallo
-The city of Montevallo is embarking on it’s largest construction project in a century and is celebrating its bicentennial year at the same time, Cost said. In the midst of construction happening in downtown Montevallo, Cost said four new small businesses and Taco Bell are coming to the city. The downtown construction will increase accessibility for parents with children and for those with disabilities or special needs.
Cost also said Montevallo has the best educational facilities in that state.
“You can walk from your preschool years all the way through higher education,” Cost said. “Education is one of our strongest assets.”

Gary Waters, mayor of Pelham
-Waters said the city’s commercial and residential stars are up from where they were at this time last year. He highlighted the many construction projects happening in the city, such as building of a new library, a middle school, recreation center and the 44,230-square-foot HealthSouth physical rehabilitation center that is set to break ground in March.
“You can just drive down the street and see all of the construction going on,” he said.
Waters added that the city’s flood mitigation project and a sidewalk project on Bearden Road are both set to be completed this year. The city is also one step closer to having a professional hockey team. The City Council recently entered into a lease agreement with Birmingham Hockey Club for use of the Pelham Civic Complex and Ice Arena for games.

Bridgette Jordan Smith, Vincent City Councilwoman
-Smith described Vincent as a “small city with a big heart, a lot of goals, a big wish list and no money.” Smith highlighted a recent grant the city received to revitalize downtown Vincent. The city is also in the process of improving its municipal park by adding tables, benches, grills and improving the restrooms and baseball fields.

Lee McCarty, mayor of Wilsonville
-McCarty boasted Wilsonville as a great small town that has everything you need. With a population of 1,900, McCarty said the town doesn’t have to deal with the traffic congestion that bigger cities face. He urged those who are tired of traffic jams to consider moving to Wilsonville. He also highlighted the city’s sound financial state. He said the city has enough money in the bank for 600 days of operation. The recommended amount is enough money for 90 days of operation, he said. Upcoming projects include building new sidewalks, installing new water and sewer lines and the city recently installed new water meters. He said the city has also been looking into adding Wi-Fi to downtown.

Morris resigns from Shelby County Board of Education

FROM STAFF REPORTS COLUMBIANA–Kevin Morris has resigned from Shelby County Board of Education effective Feb. 13.  Morris, who served for two... read more