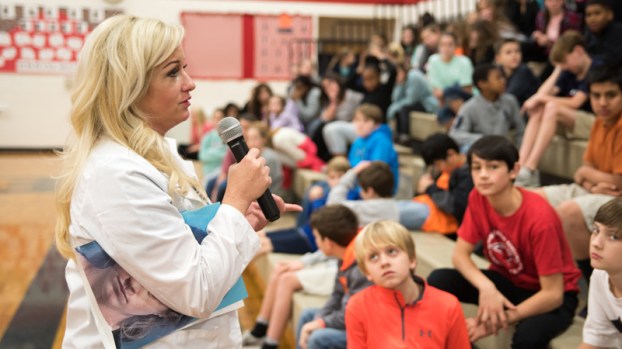 While speaking to students at Oak Mountain Middle School on Feb. 16, Angela Blackwell holds a copy of her police “mug shot” taken when she was arrested on drug charges. (REPORTER PHOTO/KEITH MCCOY)

Pharmacist talks to students about dangers of drug abuse

NORTH SHELBY – Angela Blackwell has experienced the lows associated with drug abuse and wants to help others avoid them.

Blackwell, whose battle with drug addiction included living out of a pickup truck and being arrested, has been clean for 11 years and is a pharmacist in Helena.

Blackwell spoke to students at Oak Mountain Middle School on Feb. 16 as part of a series of presentations related to drug abuse.

Blackwell showed a video about prescription drug abuse and then told about a boy featured in the video.

The boy overdosed and then was left by his friends at an emergency room, Blackwell said. Complications related to the overdose left him dependent on others for basic care.

“He knows what happened to him,” she said. “He’s able to comprehend. He just can’t do it for himself.”

Blackwell said the story is an example of what prescription drug abuse can take from a person and a family.

“The reason I’m here today, the reason I shared my story, is because we don’t want you guys to suffer,” she said. “We want you to have successful lives.”

Blackwell answered several questions from the students in attendance, including whether she abused drugs while pregnant. She said she did.

“That shows you how selfish addiction is,” Blackwell said. “You don’t care about anything else.”

Blackwell said one of the reasons she enjoys her job as a pharmacist is because pharmacists have ultimate authority about whether to dispense medications.

Even if a person has a prescription from a doctor, a pharmacist can refuse to dispense the medication if he or she suspects it could be abused.

“I’m really passionate about keeping it under control,” she said.