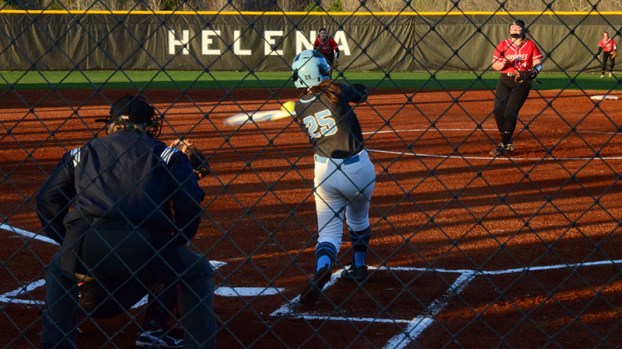 Helena’s Katie Lively (25) led the Lady Huskies at the plate in their season opening win over Hewitt-Trussville. Lively was 3-3 with three hits including a homerun and two RBIs. (Reporter Photo/Graham Brooks)

HELENA–The Helena Lady Huskies softball team had to wait an extra two days to play their season opener after the Feb. 21 scheduled opener was cancelled due to rain and they came away with a 4-1 win at home over Hewitt-Trussville on Feb. 23.

Helena’s Katie Lively had a big night at the plate and Avery Barnett had a solid night in the circle to propel Helena to the win in a battle of the Lady Huskies in the season opener.

Lively scored Helena’s first runs of the year in a big way as she drove a ball to deep left field for a two-run homerun that scored Grace Robertson to put the Helena Lady Huskies up 2-0 in the bottom of the first inning.

Hewitt-Trussville would get one run back in the top of the third inning when Tate Mosley hit an RBI double to make it a 2-1 game.

This was all the offense Hewitt-Trussville could muster however as Barnett pitched a complete game to earn her first win of the season. Barnett, a sophomore, gave up just one run and five hits over seven innings while striking out one.

“She was spot on tonight and didn’t miss many pitches at all and even on the hard hits they did have off her, my defense was on point,” Helena head coach Heidi Kouveras said after the game. “What you expect out of the first game of the season is for your team to go 110 percent and they really did and I was proud of them tonight. We hit the ball well and we adjusted is what we really did. That was probably the best first game we’ve had out here.”

Up 2-1, Helena would add some insurance runs in the bottom of the sixth inning. Maggie Blanton hit a sacrifice fly to score Robertson and with the bases loaded, Chaney Handley hit a ground ball to Hewitt-Trussville second basemen Ashley Dorn who couldn’t make the play, which scored Lively to make it 4-1 Helena.

Hewitt-Trussville would strand two runners in scoring position in the top of the seventh inning as Mosely flew out to shortstop for the final out of the game.

Lively led Helena at the plate going 3-3 with three hits including a homerun and two RBIs.

Next up, Helena (1-0) will play in the Leeds Tournament starting Feb. 24 at Leeds High School.

By GRAHAM BROOKS / Staff Writer HOOVER–After capturing the program’s first area championship in 2016 by winning the Class 5A... read more