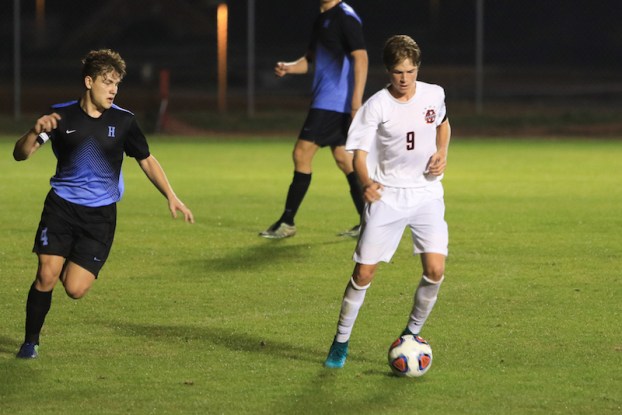 Clay Holstad tries to protect the ball from the Helena defender in a game the Eagles won 6-1 on Thursday, Feb. 23. (For the Reporter/Dawn Harrison)

NORTH SHELBY – Coming off of their win in the Lakeshore Shootout, 7A No. 1 Oak Mountain hosted 6A No. 7 Helena in a matchup of two of the county’s best soccer teams.

Thanks to four first-half goals, the Eagles were able to come away with an easy 6-1 win over the Huskies to move their record to 3-0-2 on the season.

Early in the season, Oak Mountain has been held to two ties thanks to a 2-2 tie with Vestavia to open the season and a 0-0 tie with Sparkman in the Lakeshore tournament, but they have also been able to remain unbeaten.

In their matchup with the Huskies, it was clear they wanted to keep a zero in the loss column as they came out firing on offense. Very early on in the game, Clay Holstad found Kennedy Davis inside the box as he put it home for the first goal of the game.

In the 13th minute, Davis beat his defender down the line and crossed the ball to the far post. Victor Perez was waiting in the right spot as he headed the ball past the goaltender to put Oak Mountain up 2-0.

Not too long after, Holstad made another play, this time scoring a goal of his own to put the Eagles up 3-0 as they had started the game with three quick unanswered goals.

Senior Reid Hunt decided he wanted in on the action and put home his first career varsity goal to give Oak Mountain their fourth goal of the first half before Helena netted a direct kick with six minutes left to end the Eagles run.

Neither team got many looks over the final few minutes of the first half as Helena trailed 4-1 at the break.

In the second half, the Eagles did all they needed to seal the victory as they got their fifth and sixth goal to go up 6-1 thanks to another Davis goal and a diving header from Jackson Murphy at the 15 minute mark. Davis almost put another one through, which would have given him a hat trick on the night, but instead he was called offside negating the goal.

Oak Mountain controlled the entire game getting the majority of possessions and playing great defense when they didn’t have a possession. The Eagles will now face Huffman in their first area game of the season on Feb. 28, before traveling to 6A No. 3 Pelham on March, 2.