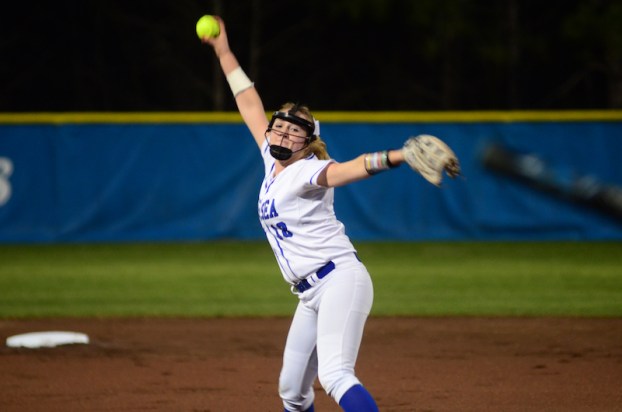 Reigning Shelby County POY Sarah Cespedes is back for her senior season on the mound for Chelsea, and she pitched an absolute gem in their season opener. (File)

CHELSEA – After winning the 6A state championship last spring, the Chelsea Hornets softball squad had to be excited to kick off their 2017 campaign with the amount of talent they had back on this year’s roster. Unfortunately, their first game, scheduled for Tuesday, Feb. 22, was rained out extending the wait.

Finally, two days later, the anticipation ended as they took the field to face off against Benjamin Russell to open their season. The Hornets debut didn’t disappoint either as they came out looking like a team that could easily win another state championship downing the Wildcats by a final score of 9-1.

The story, next to how good the Hornets looked offensively, was the return of Chelsea’s Sarah Cespedes on the mound. Cespedes, who was named as last year’s Shelby County Reporter Player of the Year, returned in a big way to start her senior season by throwing seven innings of four hit ball with six strikeouts and just one unearned run.

While Cespedes kept the Wildcats’ bats in check in the first three innings putting them down in order, Chelsea’s bats got going early. In the bottom of the first, Allie Miller led things off with a single on a grounder to center field. After a sacrifice bunt moved her over to third, the Hornets put together three straight hits to drive in three runs.

Brooke Burback singled to bring Miller home, which was followed by a Camryn Smith double to left field to bring Burback in to score. Cespedes then came to the plate and gave herself some help by singling to left field to score Smith and give the Hornets a 3-0 lead after one inning of play.

While Cespedes held Benjamin Russell scoreless over the next four innings, the Hornets’ stayed alive on offense. They picked up one more run in both the second and third innings to take a 5-0 lead.

In the bottom of the fourth inning, Chelsea picked up all of the insurance it needed. With one out in the inning, Miller drove a ball to right field for a double to put her in scoring position. After Miller stole third, Skylar Baker singled to the second baseman, which allowed Miller to come home. Burback popped out in the next at bat, but the Hornets were able to put another run on the board thanks to a triple from Smith, which scored Baker to make it 7-0.

The Wildcats tacked on their only run in the top of the sixth thanks to a fielder’s choice double play, but in the bottom half of the inning, the Hornets put up two more runs to win by the 9-1 final.

Miller, a second team All-County player last year, went 3-4 at the plate with two runs scored in the game. Smith had a strong day as well going 3-3 with two runs scored, one RBI and one walk. Chelsea also ran the bases extremely well as Miller, Baker, Gracie Bradford and Ingram Holt all had a stolen base.

By ALEC ETHEREDGE | Sports Editor CALERA – The Calera Eagles came into the 2017 baseball season as one of... read more