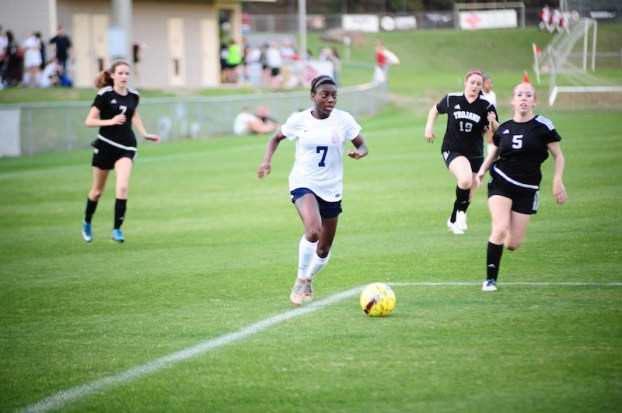 Nicole Payne breaks past the defense as she prepares to shoot one of her several goals in Oak Mountain’s opening game of the Lakeshore Shootout. (Reporter photo/Alec Etheredge)

BIRMINGHAM – The second weekend of the 25th annual Lakeshore Shootout brought several of the top girls soccer teams from across the state to the Birmingham area for the prestigious tournament.

Last week we saw the Oak Mountain boys win the Gold division of the bracket, while the Westminster boys took home the Silver bracket championship.

The Oak Mountain girls were the only team to win their division as they took home the Gold bracket championship, giving their boys’ and girls’ team a clean sweep over the two-weekend event.

Play got under way on Friday afternoon, Feb. 24, and the Eagles jumped out to a quick start in the tournament as they dominated Carrollton High School 7-0, which was good enough for 10 points on the 10-point scoring system.

After the conclusion of that game, they took to the field shortly after to take on Ft. Payne High School. Yet again, Oak Mountain got an easy win, this time by taking down the Wildcats 10-0 for another perfect 10 points bringing their total to 20 heading into day two of the tournament.

During the second day, the Eagles faced off against James Clemens who gave them their toughest test of the tournament, but Oak Mountain was able to outlast the Jets by a final score of 3-1 to give them nine more points as they finished with 29 total, which was just one point off of a perfect three-game score.

Chelsea was the next closest team to Oak Mountain in the Gold bracket as the Hornets finished with 22 points and a second place finish in the division.

They opened the tournament with an easy 5-1 win over Bob Jones on Friday afternoon to give them 10 points after one game. Their second game with James Clemens, however, was a much tighter contest. Chelsea fought to a 1-1 tie only giving them two points for a total of 12 after day one.

The Hornets got back on track offensively in their last game of the tournament on Saturday as they put up four more goals in a 4-1 win over Carrollton to give them a closing 10 points.

In the Silver bracket, Indian Springs made a strong push for the championship after opening with a 5-0 win over Oneonta to gain 10 points after their first game. They finished night one with a 3-1 win over Bayside High School to give them a total of 19 points.

After Decatur had picked up two wins and 16 points on day one, they trailed Indian Springs by just three points, which set up a championship matchup between the two on Saturday. A win by either team meant they would win the Silver bracket, while a draw would have given the championship to Springs.

In a very tight contest, Decatur narrowly pulled out a 2-1 win, which gave them a total of eight points to win the Silver division 24-20.

Helena was also in the silver bracket and finished with seven points after losses to Springville and Decatur and a draw with Bayside.

Pelham finished in second place behind Springville in the Bronze bracket after an opening round 3-1 win over Leeds before falling to Springville, 2-0, and Oneonta, 4-3, to close out the tournament.

Oak Mountain’s girls moved to 5-0 on the season with their three wins over the tournament and they currently sit as the No. 2 7A girls team in the state. Chelsea’s girls are now 2-2-2 and sit at the No. 4 spot in Class 6A. The tournament opened the season for Indian Springs making them 2-1 overall on the young season as they are ranked No. 4 in the 1A-3A classification.

By ALEC ETHEREDGE | Sports Editor NORTH SHELBY – Coming off of their win in the Lakeshore Shootout, 7A No.... read more