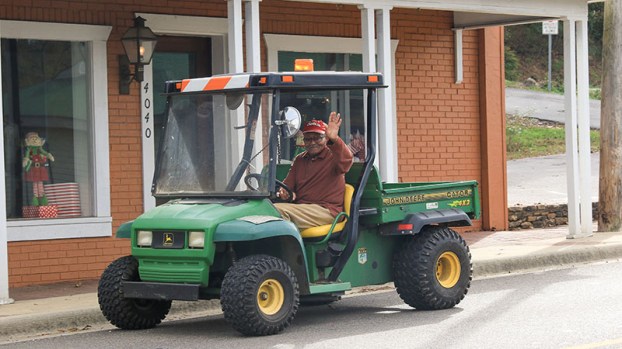 McCall received numerous waves from Helena citizens throughout the day while working for the city. McCall passed away the week of Feb. 20. (File)

HELENA–A man with a servant’s heart and a fixture for a number of decades in the city of Helena passed away the week of Feb. 20, and a number of Helena residents and city officials expressed their sadness and condolences.

When the name Zodie McCall is mentioned within the Helena city limits, most residents think of a kind-hearted, genuine man who loves his job and loves the city of Helena.

McCall had a long history with the city of Helena that dated back to 1972 when he began working as an auxiliary police officer.

When McCall began working as an auxiliary police officer in 1972, he also made history.

McCall was the first black police officer hired in the Helena Police Department and McCall said his time there was great. He was treated fairly and with respect for the eight or nine years he was on the force.

“When you’re full of Jesus Christ, you don’t think about nothing like that,” McCall said in a 2015 interview. “It was great, I was treated nice and I couldn’t ask for anything else.”

In addition to making history on the Helena Police force, McCall spent the later years of his life working for the city of Helena where he could be seen riding around on his golf cart three days a week picking up trash and helping in whatever way possible to keep the city clean.

In 2015, the then 79-year-old McCall was retired but claimed Helena saved his life and he felt it was his duty to give back to the community.

“I’m on a golf cart picking up trash and waving at people. That’s a gift the good Lord gave me and I wouldn’t take anything for it,” McCall said. “I do that three times a week. I have my house going up for sale for commercial, but I’m still going to live in Helena because I believe Helena saved my life.”

One of the biggest things that stood out about McCall was his personality and friendly demeanor.

During his lifetime, McCall was in numerous lines of work that placed himself around people including being a police officer, a convenience store owner, serving 29 years with the Shelby County Board of Education as a school bus driver followed by working at the local Winn Dixie.

“Meeting people is my hobby and it’s what I like,” McCall said in 2015. “When I worked at Winn Dixie, children used to come by there and I used to always give them a quarter or two or a dollar to buy something, and I still will do that now. It’s all about how you treat people. One boy one time told his mom, ‘Hey that’s the money man!’”

McCall was a devout Christian and could often be seen wearing a red baseball cap with the phrase “Jesus is my boss.”

Helena Mayor Mark Hall said McCall was a longtime resident and city employee known by mostly everyone who lives in Helena and said he will be “sorely missed.”

“Zodie was a great man, and a good friend to me and many more,” McCall said on his Facebook page. “A devoted Christian, father, husband and friend to all, Zodie will be sorely missed.”

For the past eight years or so before his death, McCall continued to keep the city of Helena clean while always waving and keeping a smile on his face.

In 2015, when asked how long he wanted to continue working for the city, McCall responded by saying “as long as the good Lord lets me.”

Some of McCall’s hobbies included watching Nascar, baseball, football and working around the house.

At this time, there has been no final word on funeral arrangements. The information will be shared on the city of Helena’s Facebook page as soon as the information becomes available.

PELHAM – On Saturday, Feb. 25, the Pelham Civic Complex and Ice Arena was one of 300 local associations across... read more