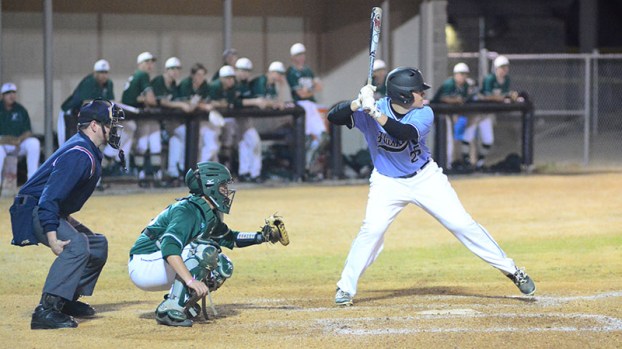 The Helena Huskies are now 4-1 this season after going 2-1 the weekend of Feb. 24. The Huskies dropped a game to Grissom but rebounded to defeat Hartselle and Bob Jones on Feb. 25. (File)

Helena dropped a Feb. 24 game to Grissom, but rebounded nicely on Feb. 25, defeating both Hartselle and Bob Jones in a doubleheader.

Grissom handed Helena its first loss of the season on Feb. 24, after putting together multiple innings where they scored at least two runs to win 10-3.

Neither team could push a run across in the first two innings and it was Grissom that came up with a big inning in the bottom of the third to break the scoreless tie.

Grissom scored four runs in the inning on one swing of the bat from Justin Fosque.

With two outs and the bases loaded and facing a 2-2 count, Fosque hammered a ball over the centerfield wall for a grand slam to put Grissom up 4-0 to grab momentum.

Grissom would tack on two more runs in the bottom of the fourth inning on a wild pitch and an RBI single to extend their lead to 6-0.

The deficit would be too much to overcome for the Huskies, even though they would cut the 6-0 lead in half in the top of the fifth inning.

Brett Walton scored Helena’s first run of the game on an RBI single to score Braylon Moss. Nick Ragsdale later doubled in the inning to score Trevor Bell and Jake Busby to make it a 6-3 game.

That would be as close as Helena would get as Grissom responded with three more runs in the bottom half of the fifth inning and eventually scored one more run to make it a 10-3 final. Helena was shutout in six of the games seven innings.

Helena had a quick turnaround after a 10-3 loss to Grissom on Feb. 24, as Hartselle awaited the Huskies for a Saturday morning game on Feb. 25, and Helena responded in a big way.

Helena starting pitcher Brooks Brophy toed the rubber against Hartselle and would dominate from the opening pitch.

The Huskies offense gave Brophy an early 3-0 lead to work with and Brophy would not let it go to waste.

Brophy threw a complete game shutout and allowed just three hits over a span of five innings in a shortened contest due to a mercy rule. Brophy also recorded five strikeouts in the win.

After scoring just three runs in seven innings the night before, Helena exploded for 11 runs on eight hits in five innings.

In addition to a stellar pitching performance, Brophy also collected three hits and two RBIs at the plate.

In the second game of the doubleheader, Helena took advantage of some Bob Jones pitching mishaps as the Huskies broke the game open late to win 10-4.

The first six innings of the game were a back-and-forth affair as both teams were tied 4-4 heading into the final inning.

Helena batted first in the top of the seventh inning and the Huskies would tack on more than enough insurance runs to win the game.

Up 7-4, Brophy would score the next run on a passed ball and Nash Adams would score on a sacrifice fly. The tenth run of the game came after the Bob Jones pitching staff surrendered another walk.

With a six run cushion heading into the bottom half of the seventh, Helena’s Landon Green would close out the game forcing two groundouts and a strikeout while allowing just one single.

By ALEC ETHEREDGE | Sports Editor NORTH SHELBY – Coming off of their win in the Lakeshore Shootout, 7A No.... read more