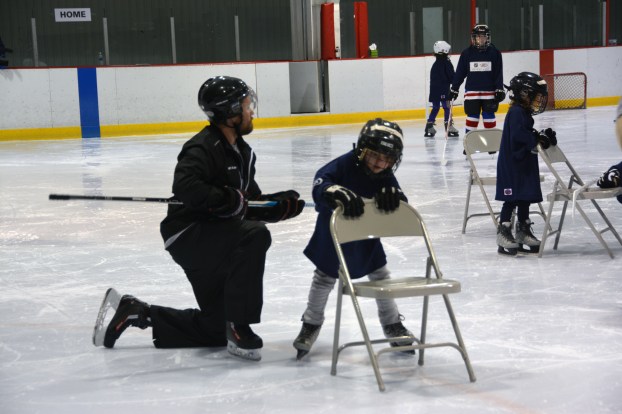 Participants learn how to skate by holding on to the backs of chairs and using them for support. (Reporter photo/Briana Harris)

PELHAM – On Saturday, Feb. 25, the Pelham Civic Complex and Ice Arena was one of 300 local associations across the nation hosting a Try Hockey for Free event to promote the sport.

Participants got to keep the jerseys and hockey sticks.

Parent Stephanie Kibbler, of Columbiana, said her 9-year-od daughter participated in the event. Kibbler’s 8-year-old son already plays hockey and her daughter became interested in the sport after seeing her brother play.

“Try Hockey for Free is a good concept,” Kibbler said. “Purchasing all of the gear for a sport, especially hockey, is expensive so being able to try it out for free is great. ”

During the event, which drew more than 70 people, six to eight coaches taught the basics of hockey, like how to skate and how to hit a puck.

“A lot of people in this area don’t know a lot about hockey so this is a way for us to introduce them to it,” Hudson said. “Somebody might try it and like it. We call it getting the hockey bug.”

Hudson said the age of participants ranged from 4 years old and up. The Ice Arena offers youth and adult hockey leagues.

PELHAM – Hundreds of high school thespians from across the state converged at Pelham High School from Feb. 24-25 for... read more