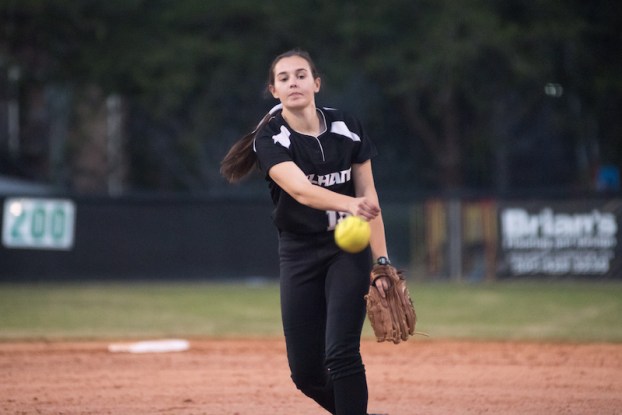 Cadence Crocker pitches in Pelham’s first game of the season and the tournament against Briarwood. (Reporter photo/Keith McCoy)

Pelham softball off to 3-1 start

BIRMINGHAM – The Pelham Panthers softball squad is off to a strong 3-1 start after winning three games in the John Carroll Softball Tournament between Feb. 24 and 25, before falling in the championship game to Chilton County 4-2.

In their three wins over the two-day period, the Panthers exploded for 25 runs and 25 hits to put away Briarwood, John Carroll and Clay Chalkville to start their season 3-0.

After their first couple of games were rained out on Tuesday, Feb. 21, Pelham opened their season with county foe, Briarwood. The Lions out-hit Pelham 9-6, but were only able to put three runs on the board compared to the Panthers’ eight. Briarwood struck first in the bottom of the first inning on a homerun from Riley Coyne to go up 1-0.

Pelham answered back with two runs in the top of second and third inning to take a 4-1 lead. Nothing was doing in the fourth inning, but Pelham came out in the top of the fifth and put up four more runs thanks to two hits as well as three errors by the Lions’ defense. Briarwood was able to put two more runs on the board in the bottom half of the inning, but it wasn’t enough to overcome their six errors on the day. Cadence Crocker had a nice game in the circle throwing five innings and striking out three. She also went 1-3 at the plate with two RBIs.

Game two of Pelham’s season only took three innings to complete as the Panthers put up five in the first and six in the second to take a commanding 11-1 lead. After each team added one in the third, Pelham was able to walk away with the 12-2 run-rule win. They exploded for 14 hits in the game as five players had multi-hit games and four had multi-RBI games. Hannah Murcia only gave up three hits and two earned runs while striking out three as she was able to easily handle the large lead.

Pelham won a come-from-behind game over Clay Chalkville in game three of the tournament. The first two innings went very quietly as neither team threatened to score, but Pelham was able to get on the board first in the top of the third thanks Dalton Merrill ground ball which led to a fielder’s choice allowing Hannah Pritchett to score.

Clay answered back with two runs in the bottom half of the inning to take a 2-1 lead, which left the Lions with one inning to tie or take the lead. In the top of the fourth they didn’t just take the lead, they went off for four runs to take a 5-2 lead. Yet again, the Panthers limited their errors while their opponent had four in the game.

In the championship game of the tournament, Pelham squared off against Chilton County. After jumping out to a 1-0 lead in the first, they weren’t able to hang on as the Tigers came back to win 4-2. The Panthers put a run on the board in each of the first two innings, but were held scoreless in the third. Chilton County on the other hand put up two in the second and broke a 2-2 tie in the third with two more runs. The Panthers only picked up one hit in the final game of the tourney, and were outhit for only the second time in their four games after the Tigers picked up seven hits.