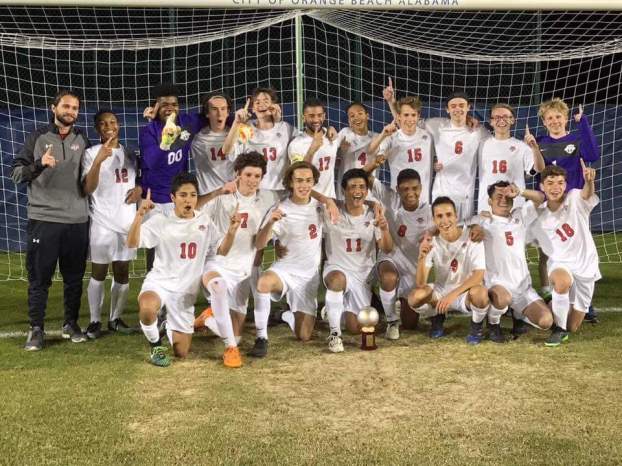 The Thompson boys pose for a picture after winning the 2017 Island Cup in Gulf Shores. The Girls also won a championship after taking down John Carroll. (Contributed)

GULF SHORES – Both Spain Park’s and Thompson’s boys and girls soccer teams traveled down to the Gulf Shores/Orange Beach area to take part in the 2017 Island Cup on Feb. 24 and 25, which brings together some of the best soccer teams from across the state.

All four had strong showings, as the Thompson girls made a run to the championship match, while both the Thompson boys and Spain Park boys faced off against each other in the guy’s championship game after stellar performances.

The Lady Warriors started things off with an early morning match against Foley High School to open the tournament. Thompson played strong defensively and used two goals to advance in the winners bracket with a 2-0 win.

They then went on to face Hartselle in the second round and won in much easier fashion as they defeated the Tigers 5-0 thanks to two goals from Sydney Ferguson to advance to the semifinals.

In their semifinal matchup the Warriors faced off against Huntsville High School and had probably their most compelling matchup of the entire tournament. It was a tight back-and-forth game, but the difference came on a corner kick from Peyton Poe as she nailed it perfectly to Allison McCrimmon who headed the ball past the goaltender into the back of the net for the only goal of the game.

The 1-0 win set up a championship match between Thompson and the 6A No. 1 team, John Carroll Cavaliers later that afternoon.

Yet again, the Lady Warriors defense and goaltending was their strong suit in the championship game. They controlled things for much of the game and were able to hold the John Carroll to zero goals in the game after the Cavaliers came into the game with 14 total goals in the tournament.

Thanks to a Penalty Kick from Poe in the first half, Thompson led 1-0 at the break, which was all they needed. Meghan Cottingham, however, added an insurance goal early in the second half to give the Warriors a 2-0 win and the 2017 Island Cup Championship in the girls division.

Thompson didn’t allow a single goal in their four games throughout the tournament and outscored opponents 10-0.  Their four wins brought their overall record to 7-0-1 as they have yet to lose a game and their only blemish is a 1-1 tie with Spain Park.

Thompson’s boys had a strong run as well, but it definitely featured a lot more nail-biting than any of the girls games.

Starting the tournament off immediately with a nerve-wracking game, the Warriors faced 3A-4A No. 3 St. John Paul II Catholic High School, and forced a 0-0 tie at the end of regulation. With it being their first game of the tournament, there was no shootout to determine a winner.

Thompson did however move on to face Davidson High School in their second game of the tournament and had a much easier time of things. The Warriors had their strongest offensive output of the entire tournament posting three goals and still kept up a strong defensive effort as they shut out Davidson 3-0.  Kenny Rodriguez, Lupe Vilanueva and Jackson Hall accounted for their three goals, while Cole Hadley added an assist.

The Warriors third game of the tournament took place the following day against a tough Grissom team. The offense reverted back to its ways of the first game and struggled to get any momentum early in the game as the Tigers played strong defensively. The good thing for Thompson was their goaltending and defense was right on pace with that of Grissom’s and helped force another 0-0 tie at the end of regulation.

This time there was a shootout, which the Warriors just absolutely dominated as Nick Adams didn’t give up a single goal. Thompson on the other hand saw Rodriguez, Kevin Santana and Dylan Jackson all score to give the Warriors a 3-0 shootout win for a 1-0 win in the game to advance them to the championship against Spain Park.

Adams didn’t allow a single goal the entire tournament and Thompson needed every bit of it as they only outscored their opponents by a slim 4-0 margin through their four games.