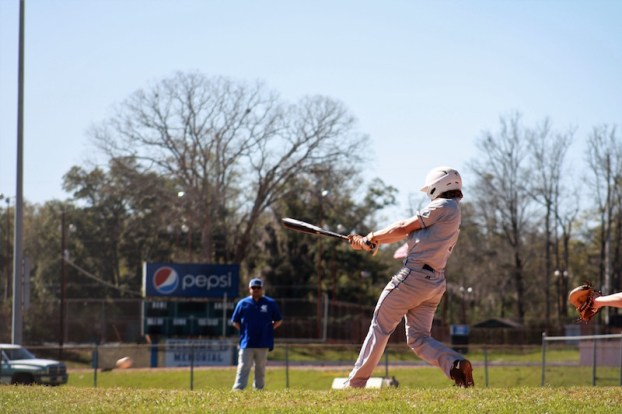 Kingwood’s Seth Lovvorn has helped the Lions jump out to a 6-1 start in the 2017 baseball season as they have outscored opponents 69-19. (Contributed)

Kingwood baseball off to a 6-1 start

The Kingwood Christian School baseball squad is off to a nice 6-1 start on their 2017 campaign. The Lions picked up dominating wins in their first three games of the season beating opponents by a combined 41-0 after they took down East Memorial, 15-0, Evangel, 10-0, and North River, 16-0.

They went on to lose their next game to Tuscaloosa Academy, 6-1, but rebounded nicely in their tournament at Selma, Feb. 24-25, where they won three more games in a row due to their bats waking back up.

The tournament started out in very interesting fashion for the Lions as they built up a 10-0 lead over Patrician thanks to a seven-run top of the third inning, but just narrowly hung on to win after giving up seven in the bottom of the fourth and final inning.

Kingwood used four different pitchers in game one, and to make things even crazier, only one of the seven runs the staff gave up in the final inning was earned. Josh Velo had a monster game at the plate going 2-3 with a triple, three RBIs and one run scored. Six different Lion players had a hit and an RBI during the game.

The Lions started out a little slower in game two of the tournament, giving up four unanswered runs in the first three innings. Seth Lovvorn got the start, but gave up three straight hits and three runs to start the game without tallying an out. Velo came in to give him early relief in the first inning and had a strong performance striking out nine and giving up just four hits and one run.

Trailing 4-0 in the bottom of the fourth, the Lions woke up and put a 10-spot on the board after exploding for seven hits in the inning and seeing five batters get a free pass due to a walk or hit by pitch. In all, 15 guys came to the plate in the inning as Kingwood took easy control of the game and went on to win 10-4.

Lovvorn did have a nice day at the plate going 2-3 with two RBIs. Luke Mitchell also had a multi RBI game with three after going 2-3 from the plate as well. Four different Kingwood players had a multi-hit game in the win.

Garrett Landry took to the mound in game three of the weekend and threw a one-hit complete game. Landry allowed just two runs while striking out nine in the easy 8-2 win for the Lions.

Kingwood picked up three runs in the top of the first before Landry even took the mound, giving him all of the insurance runs he needed to protect the lead. The Lions added two more in the second and three in the fifth for the final score.  They out-hit Coosa Valley 13-1 during the game, which included three doubles.

Kingwood is now 6-1 on the season and has outscored opponents 69-19 through those seven games.