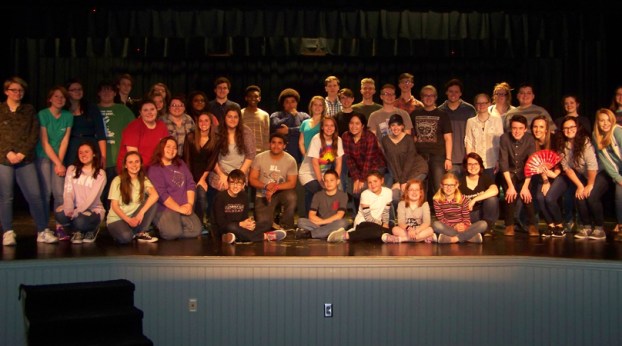 Pictured is the entire cast of SCHS’s performance of ‘Beauty and the Beast.’ Director and teacher Kathryn Myrick said she specifically chose the play to allow more student involvement. (Contributed)

SCHS to perform ‘Beauty and the Beast’

“It’s been six years since we’ve first done it. We picked it partly because it’s one of the music director’s favorite musicals, and partly because we just love Disney shows,” Myrick said.

According to Myrick, “Beauty and the Beast” gives everyone in the theatre department an opportunity to take part and sends a good message.

“It allows for such a large cast, and it allows for a lot of students to get involved with tech, acting and production,” Myrick said. “It’s a show about second chances and looking beyond outer appearances.”

While the SCHS version of “Beauty and the Beast” is set to premiere a day before the Disney film comes to American theatres, Myrick said there is no correlation between the two.

“I didn’t even know about the movie until last December,” Myrick said. “It’s really just a neat coincidence.”

Myrick said the cast has received help from SCHS alums. 2016 graduate Maggie Stogner is currently serving as the show’s choreographer less than a year after she graduated from high school.

“She was Dorothy in ‘The Wizard of Oz’ during her senior year,” Myrick said. “Now, she’s a freshman at the University of Montevallo, and she’s our lead choreographer.”

Michael Myrick and Mark Branson designed and built the sets, while art teacher Michelle Branson and her students painted and detailed them. SCHS choral teacher Ashlyn Kuyrkendall is the music director, and Myrick is the director.

Students Sarah Head and Chip Nash will star as Belle and the Beast. Titus Hunt will play Gaston, and James Bailey will act as LeFou.

Students from Columbiana Middle School and Elvin Hill Elementary School have been cast to play as wolves and villagers.

There are 16 members of the technical and stage crew. Kobe Martin is the stage manager, and Selena Williams is the assistant stage manager.

Myrick said she appreciates the combined efforts of many students for the show.

“The cast is working together very well. They’re responding to the choreography quickly and they’re meeting their deadlines,” Myrick said. “We’ve got a lot of good actors and good vocalists. The audience is in for a good show.”