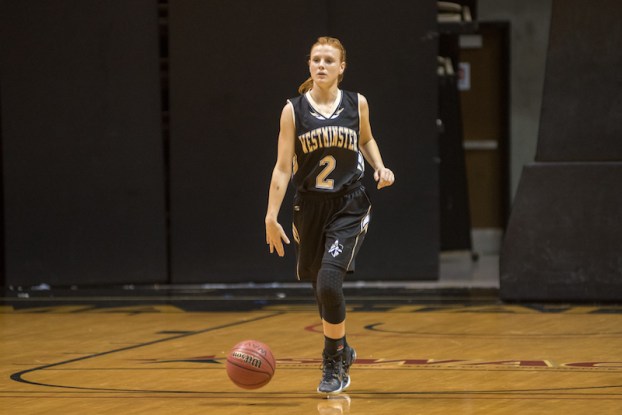 Westminster made a strong run to the Final 4 but saw their season end one game short of a championship after falling to R.A. Hubbard 48-44. (Reporter photo/Keith McCoy)

BIRMINGHAM – The Westminster Lady Knights saw a magical season come to an end in the Final 4 of the AHSAA state basketball playoffs on Monday, Feb. 27, after letting a fourth quarter lead escape them down the stretch to fall by a final of 48-44 to R.A. Hubbard.

Turnovers during the final minute and shooting 3-19 from beyond the arc were the ultimate factors in the loss, but it’s a loss that doesn’t define this team or the season it had.

Westminster led much of the second half of their Final 4 game with R.A. Hubbard before the defensive pressure became too much.

In their Elite 8 win over Loachapoka, the Knights shot the ball lights out, especially in the second half, and carried that trend over into the start of this game as Macy Mixon knocked down a 3-pointer right off the bat to put Westminster up 3-0.

Hubbard started a little bit slower but answered with a three of their own 2:34 into the game to tie it up. Neither team created much offense the rest of the quarter as Westminster only hit one basket over the final four minutes and trailed 8-7 going into the second.

The Chiefs started the second quarter on a 9-4 run to extend their lead to 17-11 before Knights’ freshman Morgan White found her stroke and hit a big 3-pointer, which she followed up with a transition layup to bring Westminster back within one.

Kee-Undria Bolden answered for Hubbard with under a minute left in the half by draining a jump shot off of an offensive rebound to put the Chiefs up 19-16 at the half.

White had nine of Westminster’s 16 first-half points on 4-9 shooting from the field.

After Hubbard came out and forced a steal on Westminster’s first possession of the third quarter to go up 21-16, it was all Knights the rest of the period. Westminster answered with a 15-4 run over the final 6:49 of the quarter thanks to several different scorers.

The key to the run was several blocked shots, defensive rebounds and forced steals, which allowed Westminster to show off their best skillset, the fast break. By the end of the quarter they had grabbed a 31-27 lead and were one quarter away from a championship game appearance.

With their seasons on the line, both teams battled as you would have expected in the fourth quarter. The Chiefs were able to take their first lead of the quarter at 38-37 with 4:12 left in the game, but it was short lived as Westminster answered back with a 6-0 run to take a 43-38 lead with a short 2:09 to play.

After White went 1-2 from the line, the Knights jumped up 44-40 at which point Hubbard flipped the switch defensively. Four turnovers in the final 53 seconds and some silly fouls led to the Chiefs ending the game on an 8-0 run to win by the final of 48-44. Hubbard shot 9-12 from the free throw line over the last 1:50 of the game to seal the comeback.

For the game, the Chiefs were aggressive, getting to the line 25 times and making 16 of their attempts, while the Knights only saw four free throw attempts the entire game making three of them.

Neither team lit it up from the field, but eight more turnovers for Westminster, going 3-19 from beyond the arc and the lack of free throws seemed to be a difference maker.

White led the Knights with 14 points, while also adding six rebounds and five assists. No other Westminster player had more than nine points as Macy Mixon and Rachel Price hit that number exactly. Megan Gache was the team’s leading rebounder with nine.

By ALEC ETHEREDGE | Sports Editor MONTGOMERY – It’s been a year of firsts for the Westminster Lady Knights basketball... read more