COLUMBIANA – A woman who allegedly made fraudulent charges to the credit card of an elderly caregiver is being held at the Shelby County Jail. 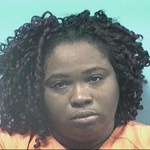 Hoover Police Department released information seeking the public’s help in locating Sheneika Lavonne Nevels, who was booked into the jail on Feb. 24, according to HPD.

“Thank you to everyone that gave information on her whereabouts,” a post reads on the HPD Facebook page. “This is yet another example of how this community stands shoulder to shoulder with its Police Department!”

Nevels was charged with identity theft.

In September 2016, Nevels worked for a company that provided services and care for seniors living at home, including meal preparation, transportation and housekeeping.

While working in this capacity, Nevels allegedly obtained credit card information from an 81-year-old victim who was serving as the caregiver for a spouse with dementia, according to HPD.

The credit card information was used at various stores to purchase merchandise totaling $1,792.72, according to HPD.

Anyone with information about the case should contact HPD Detective Ed Leach at 739-6071.

SCHS to perform ‘Beauty and the Beast’