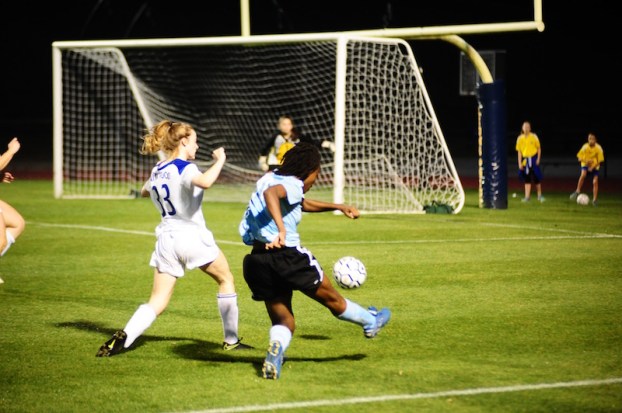 Jasmine Greene shoots the ball just before the Briarwood defender is able to get in good position. Greene had two goals in the 4-3 win. (Reporter photo/Alec Etheredge)

NORTH SHELBY – Despite giving up a hat trick to Briarwood’s Sarah Adcock, 7A No. 7 Spain Park was able to win a thrilling 4-3 come-from-behind match at 4A-5A No. 3 Briarwood on Tuesday, Feb. 28.

The first 11 minutes of the game were silent, but you got the sense Briarwood was ready to break open the scoring as the Jags’ defense struggled to contain Adcock.

She got passed the defense on several occasions and finally 11 minutes into the game she got a chance off of a Spain Park turnover near midfield and sprinted all the way to the box to sneak the ball passed the goalie and put in the first goal of the game as the Lions took a 1-0 lead.

With Spain Park’s defense struggling to maintain their back line, the offense was forced to step up and it took Jasmine Greene less than two minutes to respond to Adcock’s goal.

Just like Adcock, Greene got the ball around midfield and turned on the jets as she sprinted up the field with lighting fast speed and forcefully rocketed the ball passed the goaltender to tie things up at 1-1 12:40 into the game.

Less than four minutes later Adcock got passed the defense again and had a great look at a go-ahead goal, but the ball just drifted wide. Two minutes later at the 18:04 mark of the first half she got another opportunity after sprinting passed the defense and this time she made it count. Off the assist from her twin sister Maggie Adcock she drilled the ball in the back of the net to put Briarwood up 2-1.

Over the final 20 minutes, the Lions had several more great opportunities to score but never could capitalize leading to the 2-1 halftime score.

During the first half, you could hear Spain Park head coach Robert Starr’s frustration with his defense and the lack of attack on offense, something he clearly addressed during the halftime break.

The Jags came out in the second half and dominated the first 15 minutes by attacking and controlling the ball on their end of the field.

Thirty seconds into the half, Greene just missed out on her second goal as it sailed by the crossbar. Not too much longer after, Madison Cobb slid an incredibly long shot from close to 30 yards out just past the outstretched arms of the Briarwood goalie. Cobb’s goal tied the game 2-2 after playing just 1:40 of soccer in the second half.

Spain Park had clearly turned up the aggressiveness after Greene came back and hit the side bar of the goal very shortly after, which was followed by another Jags’ player hitting the cross bar just a minute later.

Briarwood continued to struggle defensively as Spain Park controlled the ball over the next 10 minutes and finally, after all of their chances, Cobb found the back of the net again from just outside the box for the go-ahead goal. The Jags had grabbed a 3-2 lead with 25:08 left to play.

Twenty second later, Greene got back in on the action for her second goal of the game to give Spain Park a 4-2 lead and three unanswered goals in the first 15 minutes of the second half.

Briarwood finally started to get some possessions over the last 20 minutes of the half, but could never get any consistent movement toward the goal. Finally, with 2:46 left to play in the game, Adcock broke free directly up the middle of the field and sprinted passed the defense to net her third goal of the game for a hat trick.

The Lions tried to put another one on the board in the final couple of minutes but weren’t able to put together a viable threat the rest of the way as Spain Park held on for the 4-2 win. Spain Park moved to 5-1-1 on the season, while Briarwood fell to 2-2-1.

Jacob Smith threw a five-inning no-hitter against Ramsay on Tuesday, Feb. 28. It marked the second no-hitter for Calera in... read more