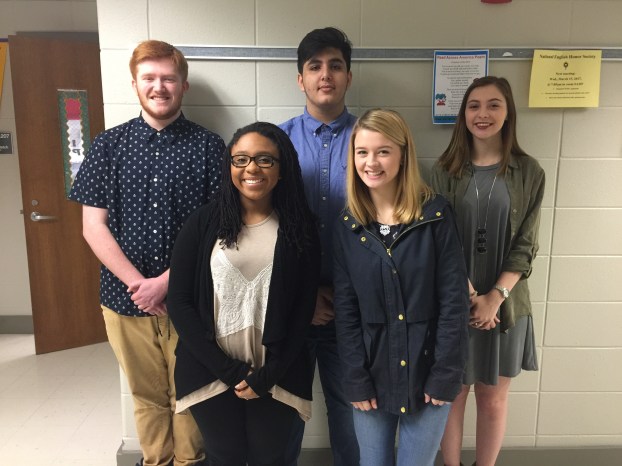 PELHAM – Five students on Pelham High School’s debate team are venturing to Montgomery March 3-4 to participate in a district debate that will determine if they’ll have an opportunity to compete at nationals.

The national debate competition will be held in Birmingham in June. Debate teacher Tonya Hatch said the students have been preparing for the tournament for about a month.

Cone said the most important factor when preparing for a debate is fully understanding the topic to be debated.

“The biggest thing is that you have to know what you’re talking about and understand the resolution,” she said.

Henderson said each person typically spends about a week researching their topic before preparing their argument, which must be supported with two to three points.

“If you’re really passionate about a topic it’s easier to talk about it and prove your point,” Matthews added.

Once their arguments are prepared, they practice by talking in front of mirrors and practicing with family and friends.

Smitherman said the class is the hardest that she’s enrolled in right now, but it’s also one of the most rewarding.

“It requires a lot of work that goes beyond the classroom,” Smitherman said. “But we have an opportunity to learn and talk about topics that high school students wouldn’t normally talk about at lunch.”

The students said being on the debate team has taught them how to form their own opinions about hot button issues instead of falling in line with the thoughts and opinions of their parents or teachers.

“If anyone is considering debate, go ahead and try it,” Cone said. “It enhances your public speaking skills and by the end of it you’ll be able to form cohesive thoughts about things.”

After high school each of the students said they would like to seek careers that involve public speaking. Henderson plans to become a teacher and then work toward obtaining a law degree. Harb said he has thought about pursuing a career as a lawyer or politician, but hasn’t completely made up his mind yet. Cone plans to study political science and obtain a law degree, and then work as a speechwriter, be a campaign manager and eventually run for the U.S. Senate.

In the school’s debate team history, Hatch said two teams have made it to the national competition and she hopes this year’s team will be the third to attend.

The team received a grant to help cover expenses related to attending the upcoming debate in Montgomery, but they are still in need of help. Anyone who would like to donate money to help with the team’s traveling expenses, contact Hatch at thatch@pelhamcityschools.org.

PELHAM – The city of Pelham recently received an $80,000 grant from the Alabama Department of Economic and Community Affairs... read more