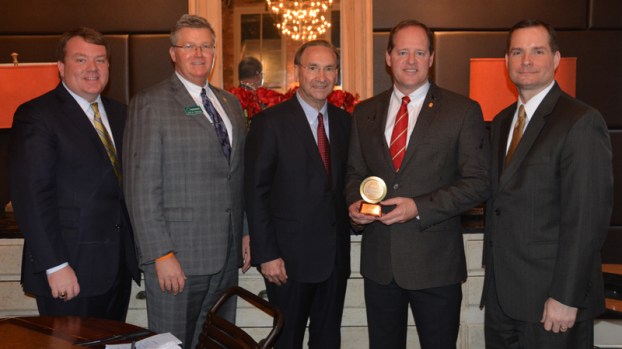 MONTGOMERY – Alabama Sen. Cam Ward (R-Alabaster) received the Business Champion Award on Feb. 21 for sponsorship of legislation to regulate lawsuit lenders and bring stability and fairness to the tort process.

Ward, in the 2016 legislative session, sponsored Senate Bill 67 that sought to regulate lending by companies seeking a share of any return from a plaintiff’s lawsuit after providing up-front cash.

“Senator Ward in sponsoring the Alabama Lawsuit Lending Act is to be recognized and commended for his steadfast commitment to legal fairness and for his opposition to lawsuit interference by third parties with a financial interest in them,” Canary said.

“Aggressive lawsuit lending poses challenges to Alabama’s legal system by charging exhorbitant interest rates on loans that can affect how plaintiffs negotiate the process,” Mancer said. “Suppose the loan is so great that plaintiffs refuse a reasonable offer from the defendant in hopes of a bigger jackpot that may or may not occur?”

“Lawsuit loans are not within our state regulations but should be just as any other lender,” Arthur said.

Lawsuit lending reform is on the BCA’s 2017 legislative agenda. Bipartisan majorities have passed a form of this legislation in the last two years, but a few senators have used procedural rules to stop reform efforts.

A former House member, Ward is chairman of the Senate Judiciary Committee.

The Business Champion Award recognizes legislators for sponsorship of and support of policies that better Alabama’s business climate and lives of employees, families and citizens.