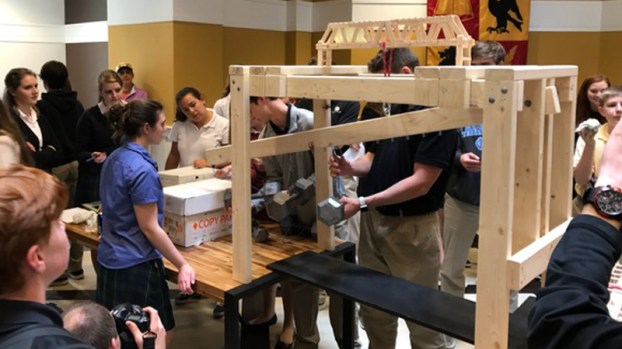 By DEANNA LOCKETT / Special to the Reporter

NORTH SHELBY – Imagine yourself at the gym doing curls with 20-pound dumbbells. Not so difficult, right?

Then, imagine yourself lifting the same amount weight but this time while doing the butterfly exercise. Your arms are now extended along your sides as you raise them up, creating a greater distance between the weight and the fulcrum, which is your shoulder.

It all began when advanced labs techniques teacher Dale Carrel challenged the students with the task of building a mechanism that could efficiently dismantle the junior class’ bridges.

These bridges would be assembled using only standard popsicle sticks and white Elmer’s glue.

Reflecting on their own experience of breaking their bridges in 11th grade, they remembered that the sand-filled bucket used to break them eventually broke itself.

To avoid this mishap, the seniors ventured to build The Grond, a wooden contraption that uses a 3-foot torque arm to apply optimal force on objects.

Instead of having to add an enormous amount of weight all at once, they drilled metal hooks into the torque arm at varying distances, so the further out that they hooked the dumbbells, the more distance applied on the bridge.

For the first time in Westminster history, the bridge-breaking event became a school-wide source of entertainment. From seventh graders and even to members of the school administration, looks of amazement appeared on their faces as they witnessed the magnificence of Grond.

They were even more excited when the Grond was challenged with breaking a bridge that held almost 380 pounds.

And so, the Class of 2017 shared its project in such a way that was not meant to simply be a testament to their talent but a testament to the power of education in a Christian environment—enlightening people of all ages and bringing about joy and laughter.