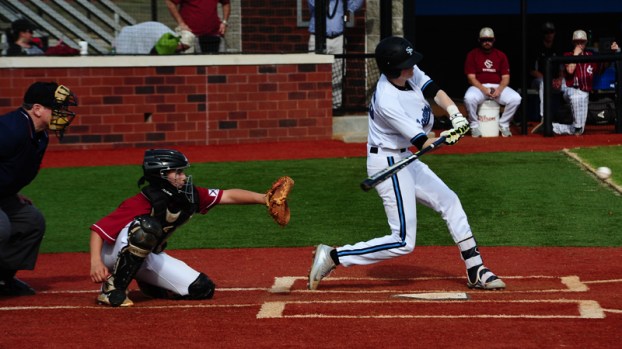 HOOVER – Spain Park High School’s baseball team is off to a fast start despite losing 12 seniors off last year’s squad and returning only two starting position players in 2017.

The Jaguars suffered their first loss on Feb. 25, 11-1 to Hartselle, but only after winning their first four games of the season.

“It’s a group of kids that, even though a majority of them weren’t starters a year ago, they do have varsity experience,” coach Will Smith said.

And though there is not much starting experience, the team boasts more seniors—13 of them—than last season and should be solid at crucial positions.

Lefthanded pitchers Will Battersby and Spencer Graham were effective for the Jags as juniors and will anchor the staff as seniors.

They will be supported by senior catcher Will Evans, and shortstop Jacob Rich and outfielder Kevin Hopkins are the team’s two returning starter position players.

“You’ve got to build it around your pitching staff,” Smith said. “You’ve got to pitch and play defense if you’re going to compete in (Class) 7A baseball.”

On offense, Smith said SPHS will need to produce productive at-bats—laying down bunts, moving runners over, executing the hit-and-run—and take the extra base on the paths.

Though the Jaguars will not have as many powerful hitters as last year, Smith said the team will be more athletic and solid 1-9 in the lineup.

Fans can expect Smith to use the early part of the season to experiment with various lineups to find the right combinations in the field and at the plate.

The consecutive wins over Pinson Valley and Bob Jones showed Spain Park can win low-scoring games as well as shootouts.

Then, against Bob Jones, Spain Park overcame three unearned runs thanks to a two-hit day by Lane Willis and multiple runs batted in by both Evans and Rich.

The Jaguars hope to improve on last season’s finish, when they were third in the area behind Vestavia Hills and Hewitt-Trussville.

“At times we looked like a playoff team, but with those top two, the margin for error was very small,” Smith said. “A play here or there made the difference.”

Spain Park begins a homestand on March 3, hosting Huntsville, Sparkman and Buckhorn on March 4, Pelham on March 7, Wetumpka in a doubleheader on March 10, and Decatur and Enterprise on March 11 before the next game away from home—at Hoover on March 14.