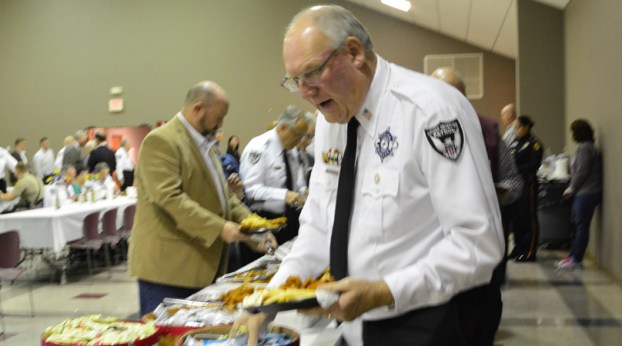 The Chelsea COP hosted the 18th annual Awards Dinner at Liberty Baptist Church. Members of the Chelsea COP were recognized for their work throughout the year. (Reporter photo/Amalia Kortright)

“We’re here to recognize all of the efforts of everybody in the organization, because this is a volunteer organization,” Thornton said. “There is no pay involved. Everybody does it because they enjoy giving back to the city of Chelsea.”

Shelby County Drug Enforcement Task Force Clay Hammac served as the guest speaker. A table for one was set in remembrance of all previous COP members who have passed away.

While the Chelsea COP members are not officers, Thornton said they are often an immense help to law enforcement in the area.

“The Shelby County Sheriff’s Office has told us time and time again that we are basically their eyes and ears at the places they can’t always be,” Thornton said. “Our mission is to observe and report. We call the Sheriff’s Office if necessary, and they come out and take care of the situation.”

According to Thornton, there are currently 40 members of the Chelsea COP, and the program always has a presence in the community.

“We do an awful lot of city, school and church programs. We help out with parking, traffic and crowd control. It involves a lot more than just sitting in a patrol car,” Thornton said.

COP member Jay Jerman said the Chelsea COP is the first COP organization in Alabama, and they were formed to accommodate for the rapid population growth the city of Chelsea has seen since it was established in 1996.

“We started when we were a young city. We didn’t have a police department and the city was growing like crazy,” Jerman said.

Jerman also said the Chelsea COP was instrumental in the formation of the Montgomery COP and the Birmingham COP, both of which attended the Awards Dinner.

“Who would have thought that 18 years later, a volunteer organization like this would still be in operation,” Thornton said. “As small as we are, we’re still here supporting the city, law enforcement and the fire department,” Thornton said.

Thornton said the main goal of the Chelsea COP is to help Chelsea residents, and he said they have done a fantastic job this year.

“What it boils down to is the effort that everybody puts out. We help each other and we’re responsible for each other. In turn, we help the city of Chelsea, the fire department and the Sheriff’s Office. It’s kind of a mutual benefit to all of us,” Thornton said. “We look forward to helping out when we can.”

COLUMBIANA- A Columbiana man was charged with rape in the first degree on Monday, Feb. 27. According to Shelby County... read more