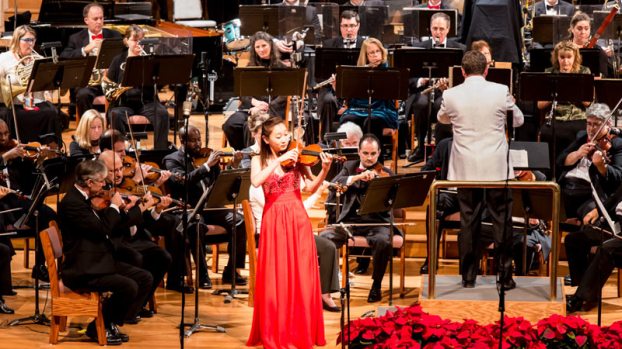 Young musicians in Shelby County and around the world are finding hope in music. These efforts have been supported by those including Alabama’s Maestro Carlos Izcaray, director of the Alabama Symphony Orchestra (ASO).

Izcaray’s hope for the world through music begins with the very smallest and started many years ago.

Through organizations and efforts to teach music to the young, Izcaray is bringing hope through teaching music to young people, literally around the world.

“To say I’m passionate about this is an understatement,” Izcaray said.

The Venezuelan-born music leader began playing in a youth orchestra at 3 years old. Izcaray is also the current director of music for the American Youth Symphony, based out of Los Angeles.

Izcaray did a lecture workshop at the Alabama School of Fine Arts, which was held on the evening of Oct. 20, where the public gathered to learn about the influence of youth orchestras.

Two local music students performed for Izcaray, their families and others attending the lecture. Violinist Haeun Kim from Indian Springs School performed a complicated solo piece for the audience.

The ISS sophomore began playing music as a toddler, starting out on the piano. Kim went with her mother, Hye-Sook Jung, to rehearsals and became inspired to make music.

Jung is the director of instrumental music at ISS.

“She started playing the piano when she was 4 years old,” Jung said of her daughter.

Jung, who was born in South Korea, has a Doctor of Philosophy and has worked tirelessly to support her daughter’s programs for musical development.

“My role models are my parents,” Kim said. Although the young musician said she was first inspired to play the cello, her fondness for the violin developed after her mother started her on the smaller stringed instrument.

Kim began playing the violin at age 4 – four months after her mother started taking Kim to her rehearsals – and went on to give her first Carnegie Hall performance at 11 years old.

“The violin is my voice,” Kim said.

In addition to a number of other exceptional performances and music awards, Kim won the violin award for the Second Leopold Auer International Violin Competition, which was held in Russia.

“Through the music, the audience and I become one,” Kim said. “What I feel afterward are the most unexplainable, happiest feelings ever.”

“The case of Haeun Kim, whose mother exposed early to music, and has since helped her by getting her the best possible teachers and opportunities, is a notable example of love and team perseverance,” Izcaray said. “Applause goes to both Haeun and her encouraging mother.”

Kim’s next public performance will be the second week of January at the University of South Carolina, where she will be the only one to represent the state of Alabama as a Music Teachers National Association competitor. She will face nine other musicians from the South. Only one winner will proceed to the national competition from there.

Walker was selected for the state’s elite youth orchestra program.

“I thoroughly enjoy being a part of the Alabama Symphony Youth Orchestra,” Walker said. “Music to me is the greatest way to express myself. Music is taking emotion and putting it into sound.”

“It is an incredible experience to work alongside fellow musicians who share my same passion,” Walker said. “I love to hear the music come together and see how everyone puts in their piece to make every performance one of a kind.”

His music career began when he was in the sixth grade. Walker’s mother, Michelle Nault, has nourished his talent and interest in music and has also found his passion inspiring.

“He continues to amaze and inspire me with his deep love of music,” Nault said. “His dedication to trying to be the best he can be and the hours of practice he puts into playing the trumpet are impressive.”

Walker is a sophomore at OMHS, and his mother has noticed the effort of the educational system that has contributed.

“We are so fortunate to have such a wonderful community of music educators in our public school systems here that teach, encourage and support students like Caleb,” Nault said. “Through their exemplary dedication and many hours of instruction and guidance, Caleb has been able to have people that believe in his ability and push him along the path to continue doing what he loves.”

Walker participated in the All-State Orchestra. Among his upcoming performances and competitions include the OMHS Wind Ensemble event for the Alabama Music Educators Association in Montgomery. He will soon march with the Spirit of Cahaba at Disney World.

“Musical talent is like a seed that can only flourish with great care and nourishment,” Izacaray said. “Therefore parents and guardians are an essential part of the equation for young artists to discover realize their true artistic potential.”

Reaching the youth of the world through music, and youth orchestras in particular, is Izcaray’s passion in life.

Izcaray knows how much the ministry of youth music education has shaped and influenced the world, and spoke of how in Caracas, Venezuela – considered the most dangerous city in the world – has re-directed the lives of some of children by the utilization of the local youth orchestras there.

“This gets them off the streets and into a more productive activity,” Izcaray said. “You go to orchestra every day Monday through Friday after school.”

His father is also a prominent Venezuelan conductor. Izcaray began conducting under the direction of his father when he was just a teenager.

Kimberly Strickland is the parent of a young boy and attended the lecture.

“I was very curious about how the orchestra programs in Latin America were structured and wanted to know the history behind the successes,” said Strickland, who is the chair of the music department at the Alabama School of Fine Arts and conductor of the ASFA Orchestra. “This lecture allowed me to have post conversations with my son about music and Latin culture.”

The title of his presentation, “Youth Orchestras in Latin America and their Worldwide Impact,” highlighted some history of youth orchestras, but also their far-reaching influence.

Izcaray’s family moved to the United States when Izcaray was a teenager.

“I made a decision to be a musician while I was here,” Izcaray said.

He became a cellist and continued his passion and work for conducting.

The Izcaray family moved to Wisconsin. His mother is also involved in the music world as an arts administrator and amateur singer.

Though he plays, he feels instructing and learning himself through playing in his own discipline go hand in hand.

“I cannot teach without playing, and I cannot play without teaching,” Izcaray said during his presentation.

Izcaray said years ago when foreign businesses bought into the Venezuelan economic infrastructure, orchestras began to flourish, calling the movement of conglomerate orchestras “a musical soup.”

There were many benefits of the youth orchestras, which have now become some of the best youth orchestras in the world. The Venezuelan government officials within the Minister of Culture’s office in 1989 also worked in particular with the foreign economic developers to increase the presence of musical performing arts.

Izcaray, who is also a composer, has led prestigious orchestras and symphonic organizations throughout the world, including the St. Louis Symphony, the Kitchener-Waterloo Symphonies, the Chamber Orchestra of San Antonio and the Venezuela Symphony Orchestra, among a multitude of others.

During his lecture, he also outlined the two different types of youth orchestras, and their sphere of influence. The first type of orchestra he discussed was the “artistic elite” youth orchestras of the world, which for the most part were established by the wealthier communities and their supporting organizations to bolster cultural development and musical preservation. These organizations feed into the older youth symphonies and can also open doors to the more prestigious symphonies.

This top-notch orchestra is the American Youth Symphony.

“This is an elite training orchestra,” Izcaray said.

His term as director of the prestigious youth organization began this year and will extend through 2019.

The second type of youth orchestra he discussed is the “subsidized social orchestral program,” the far-reaching entity that includes programs from disadvantaged sectors and can act as a tool for social development.

When fostered, it functions “as a means for social progress.” In these youth orchestras, music is facilitated as a tool to improve other facets of their lives.

Youth orchestras have begun having global influence, Izcaray explained. In Paraguay, The Recycled Orchestra Landfill Harmonic actually created stringed instruments out of the garbage from the landfill, which led to inspiring sound.

“They play Beethoven with these instruments,” Izcaray said. “These (orchestras) have made so much noise worldwide.

Strickland also spoke about how learning about the organization had an influence.

“My son was intrigued by seeing pictures of young orchestras in Latin America and was extremely impressed as he learned about ‘The Orchestra of Recycled Instruments’ that Maestro mentioned to us,” Strickland said.

Izcaray outlined the value of music education and the impact it has on cognition and thought development in the brain of a child. He sourced BRAMS, the International Laboratory for Brain, Music and Sound Research, and its subsequent findings.

More information on youth orchestras in the greater Birmingham area can be obtained through the Metropolitan Youth Orchestras of Central Alabama (MYOCA) at Myorch.org, and the Alabama Symphony Youth Orchestra at Alabamasymphony.org/asyo.ht.