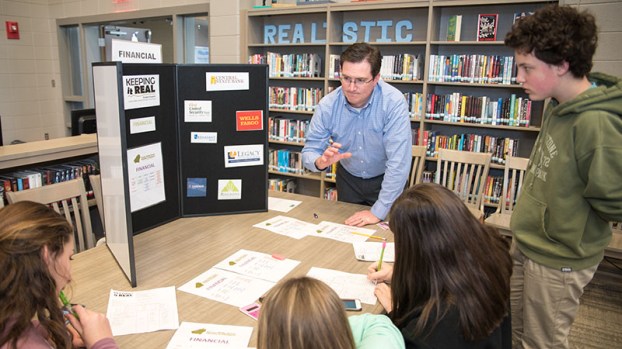 HELENA–Helena High School ninth graders came away with some valuable knowledge on Friday, March 3, about life’s expenses and how much things really cost in the real world, thanks to the Greater Shelby County Chamber of Commerce “Keeping It Real” program.

Most people understand that life can be expensive, but most high school ninth graders aren’t dealing with the reality of a full-time job or what it takes to support a family.

Members from the Greater Shelby County Chamber and a variety of career professionals filled the HHS Media Center to give students a chance to see and understand some of things they will face upon graduation.

Ninth graders were assigned a mock job title, salary, a spouse, number of kids and rotated to different stations and budgeted finances according to a yearly income.

Helena High School ninth grader Alaina Pitts was assigned the job title of a nurse and had a yearly income of $31,000. Pitts also had to account for a husband and no children.

In the end, Pitts said she had $500 left over after visiting all of the stations.

“There were some harder decisions than I thought there would be especially when it came to choosing housing and cars,” Pitts said. “I didn’t really get the house that I wanted because of how expensive it turned out to be.”

Ninth grader Payton Medeiros was assigned a teacher’s assistant job with a $20,000 yearly salary with a working spouse.

Medeiros had $1,200 in savings after completing the stations and said overall the experience was valuable to see how much things cost.

“As far as groceries and the extra stuff available to buy I didn’t expect it to be that much,” Medeiros said. “I just learned that you have to save money and learn to divide it equally and not spend it all in one place.”

Baswell said he talked about two things with the students when they visited his station: The products and services a bank provides and how to save money.

“I encouraged them to save 10 percent of their income after taxes and hopefully they could end up using the money on something fun at the end but the main reason was to have the money as a fall back plan,” Baswell said. “Most of the time, I would have the students visit the childcare station or that’s life before coming to me and most of them had an eye-opening experience when they saw the childcare expenses and how much things like that cost.”

In addition to visiting the stations, HHS students also learned the difference between gross and net income and the important of budgeting.

“I think it’s a great program and I wish I would’ve had something like this in high school,” Baswell said. “Most of these kids are doing this before their first part-time or full-time job and it’s just a great thing for them to see.”

By GRAHAM BROOKS / Staff Writer HELENA–Helena Elementary School students filed into the cafeteria on Thursday, March 2, and it... read more