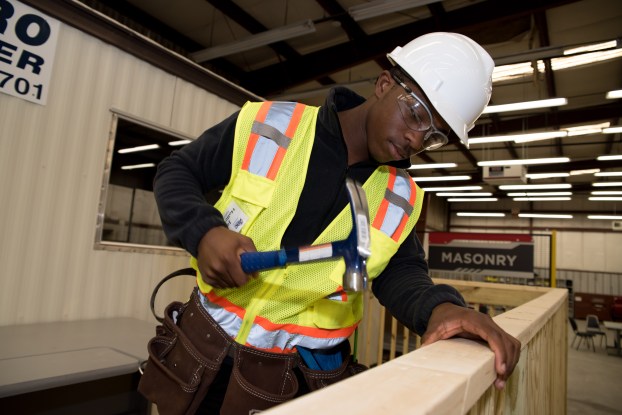 Pelham High School senior James Hollingsworth has multiple job offers in the field of construction and must decide by graduation which job to accept. (Reporter photo/Keith McCoy)

PELHAM – When he graduates in May, Pelham senior James Hollingsworth will have to decide which of six job offers to take advantage of as he makes the transition from a high school student to a working college student.

Hollingsworth is one of only a handful of PHS students participating in the Craft Academy, a pilot program that gives 10th– through 12th-grade students an opportunity receive career tech training in building construction, masonry, HVAC/plumbing, welding and electrical work.

Pelham City Schools was one of 14 school systems in the greater Birmingham area selected to participate in the pilot program at the Alabama Workforce Training Center in Birmingham. The main reason the school system was chosen is because it does not have a nearby career technical center.

The opportunity was created by private commercial and industrial construction industries, the Alabama Department of Education’s Career and Technical Education Department and the Alabama Industrial Development Training Center. The program is completely free for students.

Hollingsworth said the Craft Academy is teaching him the groundwork for the construction industry, like cutting and measuring wood.

It was after a presentation about building construction safety procedures that Hollingsworth was offered a job by a representative from Brasfield and Gorrie, one of the largest privately held construction firms in the nation.

“They told me they can’t wait for me to graduate because they need more people in the field,” Hollingsworth said.

But the offer from Brasfield and Gorrie is only one of the job offers on the table. Hollingsworth said he has until graduation to make a decision about where he wants to work.

Depending on which job he takes, Hollingsworth has the potential to make anywhere from $12 per hour to $24.50 per hour with benefits.

Although he’s being presented with job offers, Hollingsworth said he’s still going to college. He has plans to work part-time in construction while attending UAB studying finance and accounting. After college he hopes to get a full-time job as an accountant in the construction field.

Hollingsworth credits his father, who owns a construction company, with piquing his interest in construction.

“I’m grateful to have such a wonderful father who took me to work with him when I was younger and showed me the ropes,” he said. “The skills that I first learned from my dad are being nourished in this program.”

Hollingsworth said his parents are excited about the opportunities the Craft Academy has afforded him.

“My mom is so supportive,” he said. “Every time I talk to her about it she wants to know everything – every little detail about what’s going on and what I’m doing.”

During spring break, Craft Academy students will have an opportunity to have a paying job working in their designated fields. Over Christmas break, students were able to work in their field earning $10 per hour.

“I wish everyone could have this experience,” Hollingsworth said. “I get to meet kids from other schools and shake hands with representatives from successful companies – it’s just a huge deal for me. It makes me feel accomplished.”