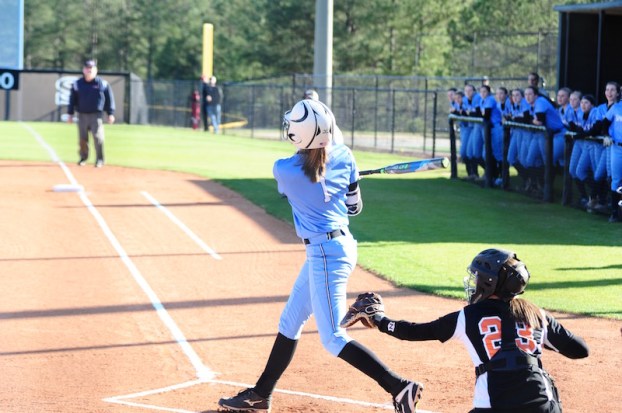 Maddie Majors watches as her ball sails over the right field foul pole for a homerun during Spain Park’s first game of the 2017 Jag Classic. (Reporter photo/Alec Etheredge)

HOOVER – Maddie Majors’ leadoff home run in Spain Park’s first game of the 2017 Jag Classic, which featured 36 of the best softball teams from across the state including five from Shelby County, was a foreshadowing of what was to come for the Jags during the tournament hosted at Spain Park High School March 3-4.

They went on to win that opener in pool play 9-0 and followed their opening victory with five straight wins on Saturday to win the 2017 Jag Classic. It marked the first time the host Jaguars had won the tournament in its 10-year existence, and might be even more special since it marks head coach CJ Hawkins’ 10th year at the helm.

It was an entertaining trek for Spain Park having won two of their games by one run, including a 2-1 win over Helena and a 6-5 win over Brookwood, and two more by three runs or less, which included a 5-3 win over Leeds and a 5-2 win over Lincoln.

When it came down to it they had won five straight games to start the tournament and found themselves in the championship game late Saturday night against Sparkman High School. If a Spain Park-Sparkman softball matchup sounds familiar, that’s because these two teams faced off in the state championship a season ago; a matchup the Senators won handily 9-2 for the 2016 state title.

In a rematch the Jags had to be extremely excited to play early in the season, Spain Park jumped all over Sparkman and came out on top 7-0 in the championship game.

Due to several games during the day and the mercy rule, the game only lasted two innings, but Annabelle Widra took advantage in the circle and pitched a no hitter. She threw both innings striking out four allowing no hits, no walks, no runs and just one error on 35 pitches.

The Jags matched the strong pitching performance with a strong offensive output, which started in the bottom of the first inning.

After the first three batters reached on an error, a single and a walk, Caroline Parker stepped into the batter’s box. After battling to a full count, Parker took the sixth pitch of the at bat and drove it over the left field wall for a grand slam to put the Jags up 4-0.

Jenna Olszewski stepped up to the plate next and wasted no time driving another pitch deep to left field that found itself over the fence for back-to-back homeruns and a 5-0 Spain Park lead. That’s all of the damage the Jags had in the first inning, but a five-run advantage is all Widra needed as she struck out the side in the top of the second.

In the bottom half of the inning, Spain Park started strone yet again with a single and a walk. Two straight pop outs later and the Jags had runners on first and second with two outs and Olszewski back at the plate.

This time, on the third pitch she saw, she drove another pitch to left field that got down for a double driving in the final two runs in the 7-0 win.

Olszewski went 2-2 at the plate with three RBIs and one run scored on a home run and a double. Parker’s grand slam made her 1-2 with four RBIs in the game. Majors also had a nice day going 2-2 with two runs scored.

Spain Park has now won 13 consecutive games to start the season 13-0 and have clearly cemented themselves as a favorite in Class 7A.

By ALEC ETHEREDGE | Sports Editor BIRMINGHAM – Not much trumps a rivalry matchup between Hoover and Spain Park, but... read more