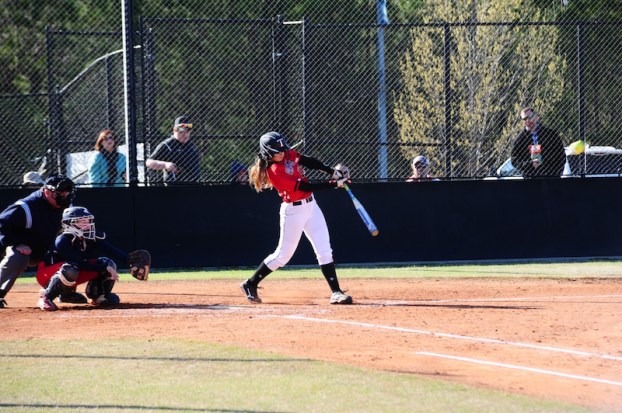 Thompson had a strong showing during the 2017 Jag Classic after making a run to the quarterfinals before falling to Oak Mountain. (Reporter photo/Alec Etheredge)

HOOVER –  They may not have come out on top, but it has been a strong start to the 2017 softball season for the Thompson Warriors who finished in the quarterfinals of the Jag Classic held at Spain Park High School March 3-4.

In pool play, which started Friday, March 3, Thompson went 1-1 with a 5-0 win over Bob Jones and an 8-2 loss to Sumiton Christian. This set up an early morning matchup with Hartselle on day two in the single elimination portion of the tournament.

Game one of the elimination tournament saw Bailey Whitfield throw a complete game shutout to give the Warriors a 5-0 win. Whitfield went all four innings allowing just two hits and no runs, while striking out five.

Thompson put up a two spot in the bottom of the first to start the game strong thanks to singles from Mikayla Touhey and Kelsey Edwards who drove in both runs in the inning.

Both teams went scoreless in the second, but in the bottom of the third, the Warriors’ bats came alive again. They started the inning with three singles and a double to put two more runs on the board, and then put up their fifth and final run of the game on a fielder’s choice that scored Touhey.

The Warriors won game two of elimination day in much more thrilling fashion.

After both teams battled to a 1-1 tie after two innings, the pitching and defense settled in not allowing a run over the next two innings sending the game to a fifth inning.

In the top half of the inning, Thompson made a strong statement on offense. Coming into the inning, they had only tallied two hits in the game, but that changed quickly.

With Maggie White placed at second to start the extra inning, DeRamus singled to right field with one out in the inning to break the tie by scoring White and put a runner on first. Lauren Haskins came to the plate immediately after and drilled a ball over the left field wall for a homerun to put the Warriors up 4-1 heading to the bottom half of the inning.

Walker put one run on the board thanks to a double with two outs, but wasn’t able to erase the three-run deficit as Thompson went on to get the final out and win 4-2 to advance to the quarterfinals.

Madison Plunkett got the start in the circle and went 1.1 innings allowing two hits and one run. Whitfield pitched the final 3.2 innings and only gave up one hit and one run while striking out six.

In the quarterfinals, Thompson faced off against very good county foe in Oak Mountain and struggled to get runs across the plate. The Eagles put up seven runs in the first three innings behind six hits to take a big 7-0 lead.

The Warriors finally put up their first run of the game in the bottom of the third, but Oak Mountain answered back with two more in the top of the fourth to take a commanding 9-1 lead. Thompson was able to put one more on the board in their final attempt during the bottom of the fourth, but just never could get runs across the plate.

Thompson didn’t struggle to hit the ball as they actually out-hit the Eagles 9-7, but just couldn’t bring the runs across the plate. Neither team committed an error in the game defensively.

DeRamus went 2-3 at the plate for Thompson while eight different players were able to pick up a hit in the game. Only two picked up RBIs, however, leading to the loss.

The Warriors moved to 8-3 on the season at the conclusion of the tournament and have started the season as one of the best 7A teams in the state.