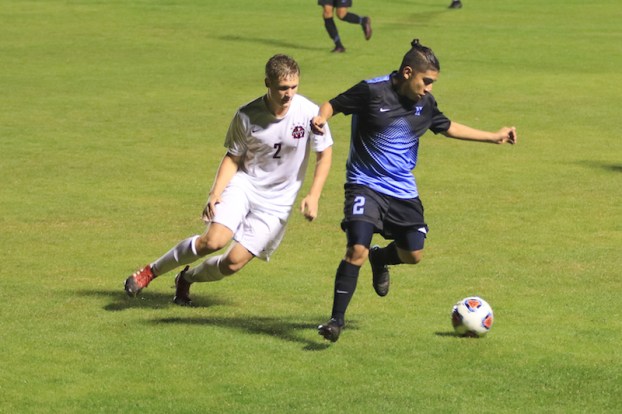 The Helena and Oak Mountain boys both found themselves inside the top 10 of their respective ranking. In all, 14 teams from the county were ranked, including four as the No. 1 team in their division. (For the Reporter/Dawn Harrison)

Soccer tends to be one of the strongest sports in Shelby County and with the most recent rankings out we continue to see why. Fourteen teams from across the county found their way into the rankings, which is down from last week’s 15, but still an incredible feat for a county that features 22 AHSAA boys and girls soccer teams.

Chelsea’s boys were the only team to slip out of this week’s rankings, but some impressive storylines continued to take precedence, including three teams ranked No. 1 in their respective classification.

Starting out in 7A, Oak Mountain’s girls and boys both came in at No. 1 for the second consecutive week. The girls started the season with seven consecutive wins outscoring opponents 58-3, but have picked up a 2-2 tie to Brookwood and a 2-0 loss to No. 2 Vestavia in their last two outings. Their overall record sits at 7-1-1, while they hold a 1-0 record in conference play thanks to a 20-0 thumping of Huffman.

Oak Mountain’s boys also started the season strong as they made it through their first seven games without picking up a loss. On Saturday, March 4, they faced off against one of the top teams in the country in Brookwood High School out of Georgia, who handed the Eagles their first loss in a close 3-2 match. The Eagles have an overall record of 5-1-2 and just like the girls, they sit at 1-0 in area play.

Both the Spain Park boys’ and girls’ teams were also ranked, with the boys being the next highest ranked 7A team in the county coming in at No. 4. In their last game on March 2, the Jags (6-1, 1-0) picked up their first area win of the year in a 3-2 win over Mountain Brook.

Early in the season, the Thompson girls and boys have both proven to be a challenger in Class 7A and both found a spot inside the top 10. The girls, who have a record of 9-1-1 overall and 1-0 in area play, found themselves sitting at No. 6 and have yet to give up more than one goal in a game limiting teams to a combined five goals so far on the season.

Moving down to 6A, the Pelham Panthers (7-2-1) made a big jump from the No. 3 team in the classification to No. 1. Through their first nine games their only loss was to No. 3 Homewood, 1-0. In their most recent game against Oak Mountain they fell 5-1, but that’s a loss that doesn’t look bad whatsoever.

With the Chelsea boys falling out of the rankings, the Hornets’ girls, No. 3, and Helena boys, No. 9, were the only other teams ranked in 6A. Chelsea’s girls have an overall record of 4-2-2 and have won three straight matches. The Huskies started the season strong with a 3-1 record, but then proceeded to drop three consecutive. They bounced back recently with a 2-1 win over Springville with area play looming.

Briarwood’s boys and girls both found a spot inside the 4A-5A top 10. The girls are the fourth highest ranked team in the county at No. 2 after a 3-3-1 overall start to the season and a 1-0 area record. Their overall record doesn’t reflect how good the team is as they have played several top 10 teams in higher classifications.

The Lions’ boys have established themselves as the team to beat in Class 4A-5A Area 8 having picked up two area wins early in the season. After a slow start to the season they have won three straight matches including an 8-0 win and 3-0 win over county foes Woodlawn and Calera.

Class 1A-3A might be the most competitive not only in the county, but the state. Indian Springs’ boys and girls and Westminster at Oak Mountain’s boys all have great shots at winning the state championship and all found a spot inside the top 5.

Westminster’s boys came in as the No. 1 boys team in the division after a strong 8-1 start to the season. The Knights have now won five consecutive games and their only loss came at the hands of 7A Mountain Brook, 2-0.

Their boys sit not too far behind at No. 5 with an overall record of 7-2, and like Briarwood have an area record of 2-0. They started the season with six straight wins, but have now dropped two of their past three contests.