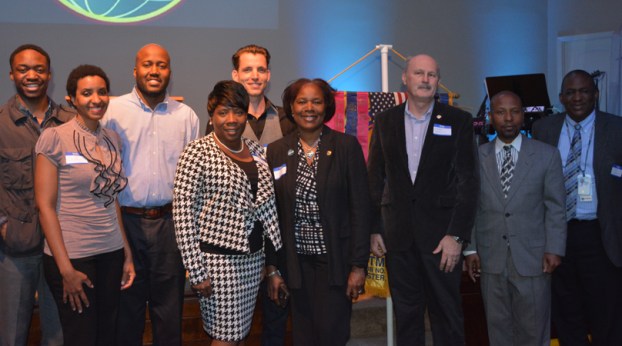 “The meetings are very structured. We have a designated toastmaster who serves as the master of ceremonies. We have people with prepared speeches, and each speaker has an evaluator who critiques them at the end and tells them what they could improve upon and what they did well. Everything we do is timed, so you’re in here for one hour, and then you go home,” Deyampert said. “This is the one time a year we have an open house, so people can see if they want to be a part of our organization.”

Deyampert said the purpose of the Toastmasters Club is to promote good public speaking skills on an international scale.

“We’ll help you learn how to speak properly and get you to feel more comfortable standing in front of an audience,” Deyampert said. “We also work on impromptu speaking, where you’re given a topic and you have to talk about it for a couple of minutes.”

Circle of Champions was originally founded by Wanda Spillers, who was looking for a public speaking group that met close to where she lived.

“When I moved back here after retiring from the military, there wasn’t a group like this in my community. I was always late trying to get to meetings outside of my community,” Spillers said. “My husband said to me, ‘you need to start one,’ so here we are now.”

Toastmasters Club Area Director Benita Jackson said she is proud of the way Circle of Champions represents the overall group.

“Members of the Circle of Champions truly are champions. They are a very cohesive group, and they work well together. They have a relationship that’s very unique, and I like their assertiveness. They’re energetic and passionate about what they do,” Jackson said.

While there are several Toastmasters chapters throughout the Birmingham area, Deyampert said hosting their meetings at Abundant Life Church makes the group more accessible to members in the Alabaster area.

“If you live out here, you probably don’t want to fight the traffic to come out. It’s very convenient to people in Shelby County, because we’re right here,” Deyampert said.

Spillers said public speaking is necessary for everyone, and there are many advantages to doing it well.

“Public speaking is not optional. No matter where you are in life, you can benefit from public speaking,” Spillers said.

Circle of Champions meets on the first and third Monday of every month at Abundant Life Church. Dues cost $45 every six months. Spillers said everyone over the age of 18 is eligible to join.

“This helps you build confidence, and you actually get to practice your public speaking skills before an audience,” Spillers said.

Lynne Edgar Harpersville Lynne Edgar, age 69, of Harpersville, passed away Monday, March 6. A celebration of life will be... read more