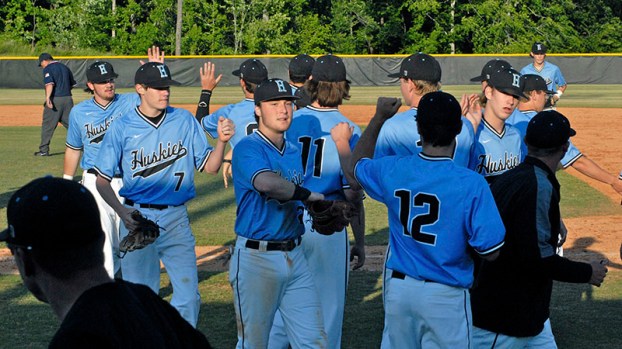 The Helena baseball team defeated Homewood, Buckhorn and James Clemens the week of Feb. 27 to improve their record to 7-2 on the season. (File)

The Helena Huskies baseball team had another solid week of games the week of Feb. 27, defeating Homewood, Buckhorn and James Clemens while dropping one game to Cullman.

Helena will look to improve each week against a variety of opponents before finally entering area play against Pelham on March 21.

The Huskies traveled to take on Homewood in a midweek game on March 2, and from the start Helena dominated in large part because of starting pitcher Troy Cordrey’s complete game shutout.

Cordrey puzzled Homewood at the plate as the Patriots combined for just three hits as Cordrey struck out nine and walked just one batter on a 92-pitch performance in which he hit the strike zone 64 percent of the time.

The game was scoreless heading to the top of the fourth inning until Helena’s Braylon Moss hit a two-out single to score Lawson Peoples to put the Huskies up 1-0.

The next inning, Helena scored four runs on a Brooks Brophy fielder’s choice that scored Trevor Bell. Nash Adams then tripled to score Riley Davis and Brophy, which was followed by a Moss single to left field to score Adams and put Helena up 5-0.

As a team, Helena collected nine hits in the game as Adams and Moss both led the Huskies with two RBIs apiece.

After playing the first seven games of the year on the road, the Huskies finally played a home game in the friendly confines of their own ballpark on Friday, March 3 against Cullman.

However, the Bearcats spoiled the home opener as starting pitcher Jacob Heatherly was sensational on the mound as he threw a no-hitter and struck out 13 Helena batters in the 5-0 victory.

Cullman jumped on Helena early in the game as Heatherly also did damage at the plate when he singled to left field in the top of the first inning to score two runs. The Bearcats tallied four runs in the inning to go up 4-0.

Cullman wouldn’t need any more offense as Heatherly fooled Helena at the plate the rest of the ballgame.

The Bearcats tacked on another run in the top of the seventh on a sacrifice bunt.

Helena needed to quickly put the loss to Cullman out of their mind as the Huskies faced Buckhorn in the first game of a doubleheader the morning of March 4.

Helena’s offense came through in the late innings to give the Huskies a 7-3 win in the second home game of the season.

Helena held a 3-1 lead going to the top of the sixth inning as Buckhorn scored two runs in the inning to tie the game.

With the game tied 3-3, Helena came to bat in the bottom half of the sixth inning and came through to break the tie.

With two outs in the inning, Brooks Brophy hit a single to left field to drive in two runs. Richard Fitts and Busby scored on the play to extend Helena’s lead to 6-3. Bell scored another run in the inning for Helena after a Buckhorn wild pitch.

Davis pitched the first four innings of the game allowing 4 hits and one earned run for the Huskies.

Helena’s Landon Green did a nice job in a relief role as he pitched the final three innings of the game allowing just one hit while striking out four to preserve the win.

The final game of the week came against James Clemens in game two of a doubleheader on March 4.

Helena capped off the week in impressive fashion as the Huskies hit double-digits for runs scored in a game for the third time this season in a 10-3 win over James Clemens.

Helena scored at least one run in every inning except the bottom of the first and collected nine hits as a team en route to the victory.

A bases loaded walk by James Clemens allowed Helena’s Nick Ragsdale to score the first run of the game as the Huskies led 1-0.

Helena scored three more run in the bottom of the third inning as Sam Praytor hit a two-run homerun over the left field wall to score Davis. Cordrey also had an RBI single in the inning to extend Helena’s lead to 4-0.

For the remainder of the game, Helena continued to collect clutch hits as a team as Brophy, Adams and Wesley Featherstone all collected RBI singles. Davis also had a two-RBI double in the bottom of the fifth inning.

Helena used four different pitchers in the game that held James Clemens to a combined three runs on seven hits.

Helena now sports a 7-2 record on the season, as the Huskies will face Stanhope Elmore, Hartselle and Russellville in games the week of March 6.