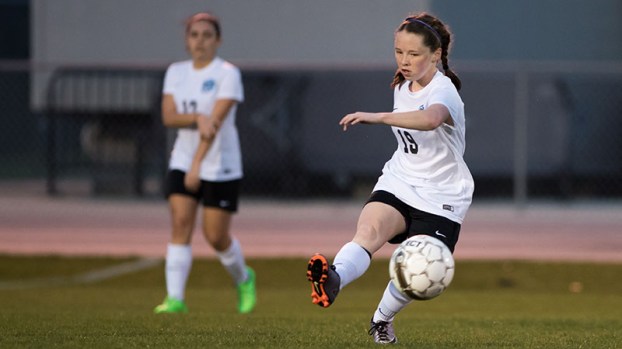 Helena’s Alexa Williams (19) recorded one of Helena’s three goals in a win against Sipsey Valley on Feb. 27. (Reporter Photo/Keith McCoy)

BUHL–The Helena Huskies girls soccer team hit the road on Monday, Feb. 27, in search of their first win of the season as they took on the Sipsey Valley Bears from the 4A classification.

Helena scored three goals in the first half, which proved to be enough for the 3-2 win.

Helena got goals from Roby Boatman, Juli Tatum and Alexa Williams in the first half as the Huskies as a team recorded 21 shots on goal against Sipsey Valley.

Helena held a 3-1 lead at halftime and Sipsey Valley would record another goal in the second half but couldn’t send the game to overtime.

Huskies’ goalkeeper Alexis Gardner finished with six saves in the game as the Bears attempted eight shots on goal.

Helena finished with five corner kicks as opposed to Sipsey Valley’s one in the game. The Bears also committed eight fouls in comparison to Helena’s three in the game.

Helena’s overall record now stands at 1-5-2 on the season and will begin area play against Pelham on Thursday, March 16.

By GRAHAM BROOKS / Staff Writer The Helena Huskies baseball team had another solid week of games the week of... read more