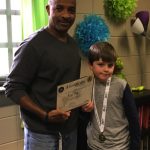 Under the guidance of Sam Scott, 12 student competitors worked diligently for months to prepare for the Geographic Bee.

The MLES runner-up is Hunter Gulledge, and the school champion is fourth grader Ace Poe.

Poe, son of James and Ami Poe, will represent the school in the state competition on March 31 at Samford University.

This is the second level of the National Geographic Bee competition, which is now in its 29th year.

School Bees were held in schools with fourth- through eighth-grade students throughout the state to determine each school champion. School champions then took a qualifying test, which they submitted to the National Geographic Society.

The National Geographic Society has invited up to 100 of the top-scoring students in each of the 50 states, the District of Columbia, Department of Defense Dependents Schools and U.S. territories to compete in the State Bees.

Visit NatGeoBee.org for more information on the National Geographic Bee.

Public television stations will broadcast the final round at a later date. Check local television listings for the air date and time in your area.

FROM STAFF REPORTS BIRMINGHAM – McDonald’s of Central Alabama announces the winners of the fifth year of the McDonald’s Celebration... read more