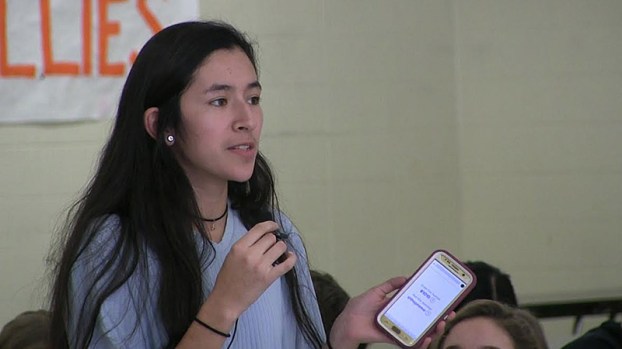 Tiffany Millian, as she speaks to the group about the Remind account during a recent student leadership meeting. (Contributed)

By BRADY TALBERT / Special to the Reporter

ALABASTER – Thompson High School students on the leadership team have met monthly to further develop and execute their group’s ideas on how to improve the school’s campus and community. In January, students worked to strengthen their leadership skills with professionals from the Dave Mathews Center for Civic Life. In the meeting, groups of students brainstormed ideas for projects they could implement at THS.

As Dr. Wesley Hester, THS Principal, said during the group’s Feb. 1 meeting, it was then time to “see some things come to life.” Groups with similar concepts began to collaborate with each other, in order to achieve a common goal.

During the meeting, Hester announced that one group’s idea, to recognize more athletics through a pep rally, would become a reality. On Feb. 9, the student body gathered for a pep rally in the gym to recognize spring sports. Jazzlyn Glover, a member of the group which originated the idea, was surprised to see the concept shape up in such a short amount of time.

Glover said, “It was kind of crazy. It happened so fast, I don’t think any of us expected it to happen that quickly”. She also believes that because her group’s ideas were recognized, the leadership team “is really going to change our school for the better”.

At the end of the second meeting, THS junior, Tiffany Millan, presented her group’s idea. Her group started a Remind account, @thspromo, to message students through their cell phones about sporting events and other activities they can attend, to show their support for their fellow peers.

By the time the March 1 meeting rolled around, one group was ready to debut their project. The group called the “Unlucky 13” created an Instagram account, @thscommunity, and a Twitter account, @ths_community, to highlight clubs, academics, and athletics.

Senior, Luke Nichols, said the social media accounts “will help students understand what each club is and how to join”.

In the third, and most recent, group session students further developed their ideas, and had the chance to share their visions with faculty members. Groups who already accomplished their ideas created new goals and had time to discuss their new concepts. The group plans to meet again this April.