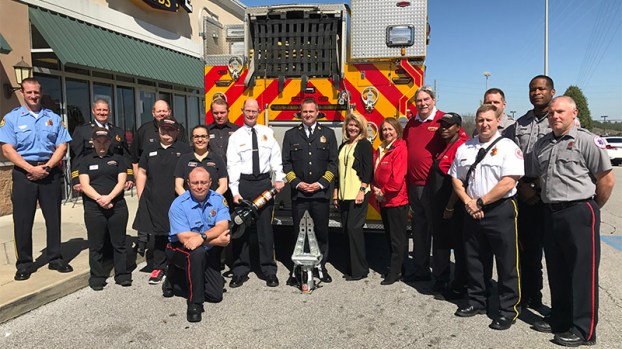 A donation ceremony was held Wednesday morning at the Firehouse Subs location on South Colonial Drive with members from both Alabaster Fire Department and North Shelby Fire District present.

“We thank everyone for their contributions that help us provide these life-saving tools,” Firehouse Subs Public Safety Foundation Executive Director Robin Peters said in a release. “Our first responders are our heroes and we want to be sure they have what they need to protect their communities.”

A total of $48,163 was awarded to two departments to update equipment needed each day by both departments.

“We received new extrication equipment that will be used to help free people from wreck vehicles,” Alabaster Fire Department Chief Jim Golden said. “This life-saving equipment is so important to our community because the fire engine it is now on previously had to wait for another Alabaster Fire Department engine to arrive. Having this equipment directly impacts the members of our community and those that pass through.”

Golden said the ability to remove a trapped individual from a wrecked vehicle allows the fire department to arrive in an emergency situation faster.

“We are so appreciative to the Firehouse Subs Public Safety Foundation,” Golden said. “This means that all Alabaster Fire Department engines now have extrication equipment on board.”

North Shelby Fire District Chief Eugene Tyler said his department was using tools that were 25 years old and were not designed to be used in today’s modern vehicles.

“This grant will enable us to extricate victims of automobile accidents in a much more efficient time frame than the obsolete equipment we were using before,” Tyler said. “’We can now quickly extricate and transport these patients to a trauma center so they have the best chance for a positive outcome.”

John and Claudia Porter are the franchisees for the Alabaster store, according to the release.

Firehouse Subs Public Safety Foundation was founded in 2005 in the aftermath of Hurricane Katrina.

As the two traveled back to Florida, they knew they could do more and Firehouse Subs Public Safety Foundation was started with the mission of providing funding, life-saving equipment and educational opportunities to first responders and public safety organizations, according to the release.

Since inception, the non-profit organization has given more than $24 million to hometown heroes in 46 states, Puerto Rico and Canada, including more than $1.4 million in Alabama.