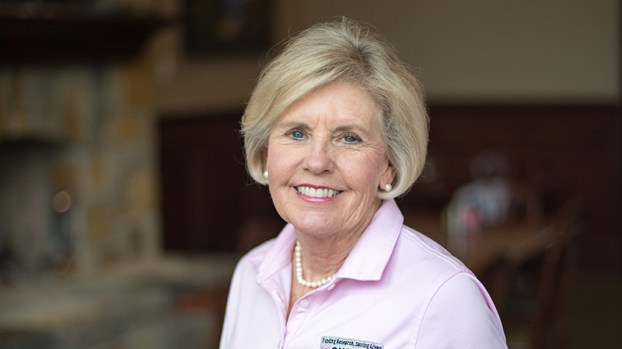 Kate Kiefer is the force behind the "Calera Goes Pink" movement, which has unified the community against breast cancer over the past several years. (Reporter Photo/Keith McCoy)

PROFILE: Calera Goes Pink – Meet the force behind the movement

“I’m a melanoma cancer survivor of 34 years,” she said. “I was in Atlanta and fortunate enough to qualify for a clinical trial at Emory.”

Research, she said, is critical to finding a cure, and someone donated the funds for the treatment that gave her 34 more years and counting.

“I’m a recipient of how somebody paid money for me,” she said, “and now I want to help pay that forward.”

That’s why Kiefer is the force behind Calera Goes Pink, the breast cancer research fundraising effort that takes over the Shelby County community every October.

It all started six years ago with a football game, she said, and just got bigger and bigger from there.

Kiefer, president of the board of directors for the Breast Cancer Research Foundation of Alabama, had contacted Fire Chief Sean Kendrick about selling T-shirts to go toward research.

He said yes — but he told Kiefer he thought they could do something bigger than that.

The next thing she knew, the local high school football team had gone pink at a special game, and students and teachers had gotten involved in a whole host of activities to raise money the week before.

Then it spread to the community.

“A lot of the retail shops will decorate their storefronts, and we have a contest to name the winners every year,” Kiefer said. “It’s doing so much to raise awareness.”

And this past year at a benefit golf tournament, they had to turn people away because they had so many entrants, she said. “This year put us close to $200,000 raised over the past six years.”

Mayor John Graham said he’s “very proud” of how the city raised such a large amount for research.

“The unity of the city, our schools, local businesses and Calera residents allow us to grow our fundraising efforts for breast cancer research each year,” he said. “Kate has been very instrumental in bringing our city together and helping us accomplish that goal and help us fight that fight together. She’s a hard worker and dedicated to the research foundation, and we’re glad to be a part of it.”

Kiefer said she’s encouraged by the strides being made in research, even though she said it’s not sexy stuff to talk about.

“There are some of our local researchers who believe we will see a cure in our lifetime, and women get behind causes like that,” she said. “It’s not just a black hole of research fundraising — it’s really going to treat women and find cures that work.”

This year’s check presentation of funds raised in the fall of 2016 has a specific target — the Dolly Ashton O’Neal Triple Negative Breast Cancer Personalized Medicine Program, which will give 20 patients personalized breast cancer treatment plans through genomic analysis and drug screens.

It’s a collaborative project of the UAB Comprehensive Cancer Center, HudsonAlpha Institute of Biotechnology and the Southern Research Institute.

“We have some of the largest and best breast cancer research facilities in the nation right here in our backyard,” Kiefer said, noting that Calera is helping keep the wheels turning toward a cure.

“This isn’t about me, this is about that little town of Calera with a big heart,” she said, noting that she’s hoping that spirit will keep spreading to surrounding communities. “I couldn’t be happier or more proud to be a part of this group.

It’s a grassroots effort, and the energy people put into it is phenomenal. And one day it’s going to work.”

Serving pancakes with a purpose

PELHAM – From greeting guests, to making pancakes and serving food, Miss Alabama 2016 Hayley Barber did it all at... read more