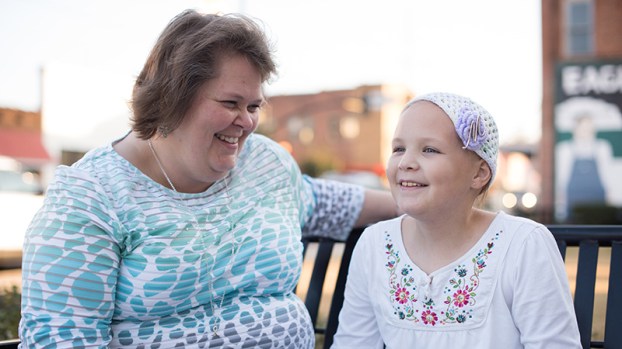 COLUMBIANA – When Renee Wilder’s little girl showed up in her life in 2003, she hit the family of four like a storm — the best kind of storm, Wilder said.

Her daughter Mollie “earned the nickname ‘F5’ from her granddaddy when she started walking at 8 months old,” she said. “He said she was like a little tornado.”

That was a surprise — but they were ready.

What they weren’t ready for was the storm that hit the week before Mollie started the fifth grade.

She was very un-tornado-like that week — lying around on the couch and “just not being her normal bouncy self,” Renee Wilder said. She’d been increasingly complaining of headaches.

“She’s not a complainer — she’s strong as an ox,” Renee Wilder said of her daughter.

So after a few days of that, a few rounds of painkillers that didn’t help, a few doctor’s visits that deemed it a normal pre-puberty headache, she wasn’t content to wait it out anymore.

It wasn’t long before she and a pediatrician had talked the insurance company into letting Mollie have an MRI.

And it was only minutes after that MRI that they were bringing Renee Wilder papers to sign.

Mollie was headed for major surgery.

‘Through it all, she was tough’

“In the first pictures, it clearly indicated she had a pretty severe brain tumor,” Renee Wilder said. “We were told the chances of her surviving the surgery were very slim and that if she did survive, she would probably have lots of complications because the tumor was on her brain stem.”

She might have balance issues, or speech problems, or deafness. The tumor was malignant, too — greater than stage 4.

“Her chances of not surviving were about 90 percent,” Renee Wilder said. “But God decided he didn’t like that number.”

This fall, Mollie — now an eighth grader — was elected Miss CMS by her peers at Columbiana Middle School.

Her life is a miracle, Renee Wilder said.

When they said Mollie might not live, she did. When they said she’d probably be profoundly deaf, her hearing has only gotten better, Renee Wilder said.

“She’s had one round of chemo and 30 radiation treatments and six more cycles of chemo,” she said. “Through it all, she was tough and a fighter.”

Mollie said she didn’t understand at all what it meant to have cancer or to really be sick before she started the treatments.

“I learned real quick about chemo drugs and radiation treatments and surgery that would make me sicker before I got better,” Mollie said.

But as she fought the cancer, she kept up with her classmates, doing work at home and attending school when she could. Jane Smith, one of her fifth grade teachers at Calera Intermediate School, would meet with her at her house to catch up her up.

“I could write a novel about Mollie’s strength, perseverance, attitude,” Smith said.

“She never complained or gave up. She always attended to each task to her fullest.”

And she showed others “what it truly means to live a Christ-filled life,” Smith said.

But Mollie doesn’t see herself as any kind of hero or role model — battling cancer was just something she had to do, she said.

“If I had not gotten up and done anything, it would not have made things better it would have just gotten worse,” she said.

But her other fifth grade teacher, Allison Hobbs, said her courage was exceptional.

“Mollie was always a fighter, even though she was facing an extremely grim and unexpected battle,” Hobbs said. “She was and is an encouragement and inspiration to anyone who faces battles beyond their control.”

People like Smith, Hobbs and the congregation at the Wilders’ church — Fourmile Baptist in Wilsonville — became pillars to the family during Mollie’s battle with cancer, Renee Wilder said.

“We are grateful for the support,” she said. “After you go through something like that, you don’t have friends anymore — everybody becomes family.”

They had support in the community long before they were in crisis — Scott Wilder, Mollie’s dad, grew up in the Fourmile community, and Renee moved to the area in the eighth grade.

They were a typical family, she said. When the brain tumor rocked their world, the boys were in the 8th and 12th grades and involved in band, and Mollie was an energetic 10 year old who loved gymnastics, tumbling and jumping on the trampoline.

The tumor “was definitely a life changer,” Renee Wilder said. “We will never be the same, and I don’t want to be. Would I have taken that from her? Yes. But I have learned so much from her that can never be taken away.”

Mollie’s living life to the fullest these days, raising awareness for childhood cancer, leaning on her faith and expressing gratitude for the support of her family, church and community.

She said she and her mom have a saying now — “make memories.”

And Smith said Mollie is a leader in the way she lives.

“Even when Mollie was in the hospital, she looked for ways to help others. She never showed her peers her disappointment, fear or anxiety. All we could see was strength,” Smith said.

For more about Mollie’s story, visit her Facebook page, Prayers4Mollie.

PROFILE: Calera Goes Pink – Meet the force behind the movement