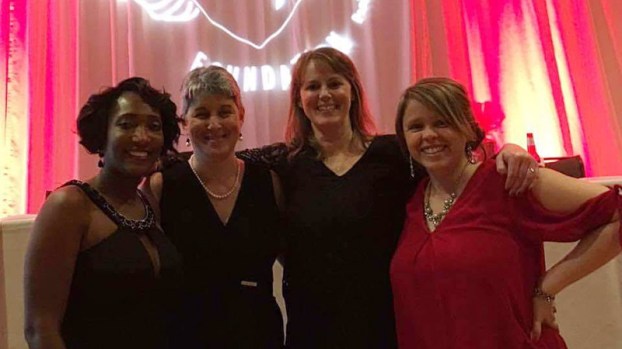 Angel Warriors debut gala raises $3,000 for those with special-needs

ALABASTER – More than $3,000 was raised to help benefit special-needs individuals and their families in Alabaster at a debut gala on March 4.

“We were so blessed by the attendance, and the response we had from everyone,” said Angel Warriors President and CEO Jamia Alexander-Williams. “The turnout was amazing, we had wonderful speakers, and we were able to help everyone know our objective and what we are about so people know we are here.”

Angel Warriors Foundation is a new Alabaster-based nonprofit organization that exists to help nurture individuals with special needs and multiple disabilities, so that they may do anything they desire to do, according to Alexander-Williams.

The sold-out event had about 150 people in attendance, and was held at the Hyatt Regency Birmingham-The Wynfrey Hotel in Hoover.

Dinner, a silent auction, and guest speaker Noah Galloway were just some of the highlights from the night, as well as another speaker, Susan Spann that advocates for Autism awareness.

“A lot of times individuals with Autism have a hard time getting in front of a crowd, but Susan brought a lot of tears to those in attendance, because what she had to say was very heartfelt and sincere,” Alexander-Williams said. “Susan really blessed everyone at the event by sharing her struggles and what she has gone through in life.”

Alabaster Mayor Marty Handlon served as the emcee for the evening.

The money raised from the silent auction and ticket sales will go to support Angel Warriors activities and events such as a special-needs playground in Alabaster, a miracle field and special-needs summer camp, and different activities held throughout the year.

“We are really excited about our miracle field, which will allow special needs kids the ability to play sports such as baseball and softball,” Alexander-Williams said. “There is a miracle field in Leeds and in Hoover, and we are very excited about being able to bring one to Shelby County. We will start off with having a field, but we eventually hope to have a miracle league for kids to be able to play basketball, soccer and baseball. We want every child in Alabaster that has special needs or multiple disabilities to have every chance to be successful in this world.”

Alexander-Williams said she hopes to make the gala an annual event.

On April 15, Angel Warriors Foundation will host an Easter Egg Hunt from 2-4 p.m. for special needs kids and their families at the football stadium at Thompson High School.

There will also be a Halloween event in October and a Christmas event in December.

“Our purpose was to introduce ourselves to the community, share our goals, and let them know what we hope to accomplish, and we are very appreciative to everyone that came out to the event,” Alexander-Williams said.