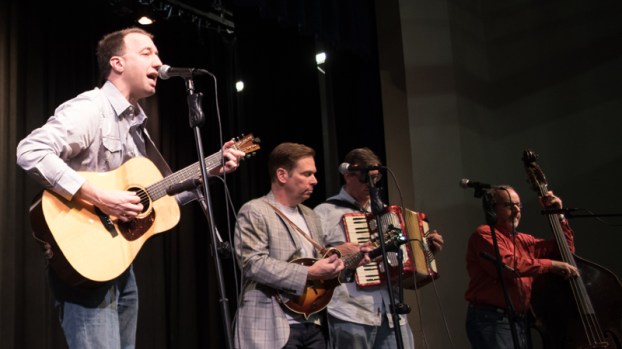 The Incoherent Ramblers was one of 14 bands to perform at Alabama Bluegrass Music Association's Showcase of Bands at Spain Park High School on March 4. (REPORTER PHOTO/KEITH MCCOY)

There is so much to do and see in Shelby County that it is easy to miss some things you might not know about.

I hope this is not the case with future installments of the Alabama Bluegrass Music Association Showcase of Bands.

ABMA’s 20th time to hold the event was the first time for it to move away from the Bessemer Civic Center. This year, on Saturday, March 4, the showcase was held at Spain Park High School, adding amenities and making it more accessible for many local residents.

The showcase featured 14 bands performing throughout the day, but perhaps even more interesting than the performances were the impromptu jam sessions that sprung up in a school courtyard.

As one performer, Bobby George, explained to me, he prefers jamming to performing on stage because it is more relaxed, informal and experimental.

“That’s what I like best,” George said about jamming. “I’m not as comfortable on stage.”

The day began with workshops focusing on all of the traditional bluegrass instruments: mandolin, guitar, acoustic bass, dobro, fiddle and banjo.

Professional instructors taught the hour-and-a-half-long workshops, which were free for ABMA members and $20 for non-members.

Food was offered by Bluegrass Barbeque and included meat-and-three options in addition to barbecue.

Boley, who is also executive director of the Alabama Bluegrass Music Hall of Fame, said four of the Hall’s 17 inductees performed at the showcase, including Jake Landers, who played with fan favorite Iron Horse.

Among other accomplishments, Landers, an Alabama native, wrote “Walk Softly On My Heart,” which was recorded by Bill Monroe and later the Kentucky Headhunters in a different version.

I hope the event returns to Spain Park High School next year and beyond.

The showcase is sure to please bluegrass music lovers, but anyone who likes music in general is sure to have a good time—whether it is taking in the performances on stage or just enjoying nice weather while listening to some old friends play together again.

There are many things to be thankful for in Shelby County. Many of those things—a vibrant economy, great schools, capable... read more