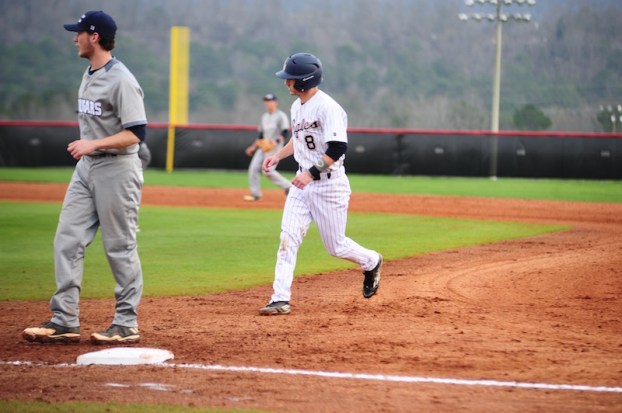 Ethan Holsombeck, above, is off to one of the best offensive starts in the county and led the Eagles to a 6-4 win over Hoover. (Reporter photo/Alec Etheredge)

Hartsfield and Holsombeck impress in win over Hoover

NORTH SHELBY – Just over a week after registering a complete game shutout of Clay-Chalkville on Tuesday, Feb. 28, Joseph Hartsfield was back to his dominant ways on the mound in a matchup with Hoover on Wednesday, March 8.

Although not as spectacular, Hartsfield went the distance in a 6-4 win over the Bucs after throwing 111 pitches over the seven inning game. He had the Hoover batters confused the entire game and held them scoreless through the first five innings of the matchup. On the night he allowed just six hits and two earned runs while striking out seven and walking two.

After going down in order in the bottom of the first inning thanks to three lineouts, Oak Mountain (6-4) came to the plate in the second inning and was in business. The started the inning with two straight singles from Mason Williamson and Caleb Floyd.

Over the next three at bats, Hoover was able to record two strikeouts while walking one batter, meaning the bases were loaded with two outs in the inning. The Eagles were one swing away from breaking the game open, while the Bucs were an out away from getting out of the jam.

It took only one pitch to break the tension and it was the Eagles’ bats that won as Garrett DeAraujo singled on the first pitch of the next at bat driving in Williamson to give Oak Mountain a 1-0 lead.

During Ethan Holsombeck’s at bat, a passed ball brought Floyd home and moved both of the other runners into scoring position. Holsombeck took advantage and drove the very next pitch to right field for a double scoring both baserunners to give the Eagles a 4-0 lead, which they held after two innings of play.

Both teams threatened but had no damage during the third inning. After Hartsfield put down Hoover in order during the top of the fourth, Oak Mountain came back to the plate looking for some insurance.

With one out in the inning, DeAraujo picked up his second single of the game to start the damage. After two consecutive pickoff attempts, DeAraujo decided to show up Hoover and took off, stealing second with ease as he moved into scoring position.

Holsombeck came back to the plate and doing what he does best, he picked up yet another clutch hit doubling to center field, which brought DeAraujo home for a 5-0 lead. A John McDonald single scored Holsombeck to give them their sixth and final run of the game leaving it in the hands of Hartsfield.

Hoover threatened in the top of the fifth, but was unable to cut into the deficit. The top of the sixth, however, was a different story.

With one out and a runner on first, the Bucs picked up back-to-back doubles and a single in just four pitches to score two runs. An error and a sac fly over the next two at bats brought in two more runs as Hoover had all of a sudden climbed within two runs.

That’s as close as the Bucs were able to get though as they grounded out in the next at bat to end the inning, and in the top of the seventh Hartsfield was able to right the ship and get Hoover to go 1-2-3 to end the game at 6-4.

Caroline Parker, pictured above, had a monster game going 3-5 with four RBIs as she helped lead Spain Park to... read more