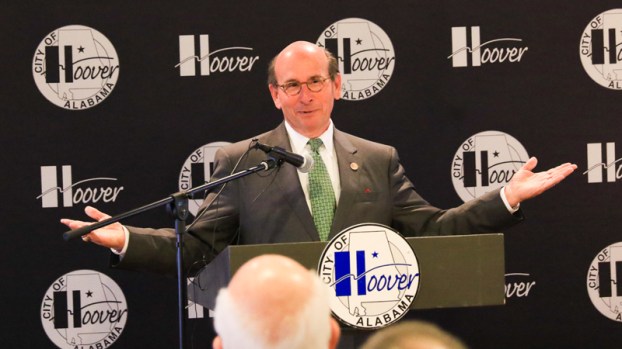 HOOVER – The city of Hoover held a ceremony on Tuesday, March 7, at the Hoover-Randle Home and Gardens to kick off its 50th Anniversary celebration.

Hoover was officially incorporated as city on May 18, 1967.

Hoover consisted of 406 residents when the city was incorporated, and in 50 years has nearly 90,000 residents, making it the sixth largest city in Alabama.

The city’s growth can be attributed to factors including completion of Interstate 65 and Interstate 459 which created a major interchange, development of the Riverchase community, opening of the Riverchase Galleria and the financial benefits that allowed the creation of many city services and boards.

“We are excited to kick off the 50th anniversary celebration today,” Hoover Mayor Frank Brocato said. “Since its incorporation in 1967, many people have contributed to making Hoover one of the top places to live and raise a family as well as a community we are proud to call home. As we go through this year and beyond, we are committed to ‘Building Community Together.’”

“Building Community Together” is the tagline for the 50th anniversary.

Ed Randle welcomed those in attendance at the kick-off event to the home, which was the site of the signing of Hoover’s letter of incorporation and is now an events venue.

Faye Anderson, who was Hoover’s first female council member and served from 1984-88, said she helped establish the Hoover Belles and a park board, and was on the council when Hoover City Schools was formed.

“What a delight it has been for this community,” Anderson said about one of the most important aspects of the city’s progress.

Rocky Ridge Elementary School Principal Dilhani Uswatte talked about the reasons she enjoys being part of the Hoover community.

“The key ingredient that makes this city so special is the people,” Uswatte said.

Brocato said it was appropriate to kick off the anniversary celebration at the place “where it all started.”

“We’re thankful for those who came before us to make us such a great city,” Brocato said. “They laid the foundation.”

Various events will be held throughout the year to celebrate the city’s 50th anniversary.

The city’s annual celebration, Celebrate Hoover Day, is scheduled for April 29 from 11 a.m. to 3 p.m. at Veterans Park. The event is free to the public with several activities for all ages.

On May 18, the day of Hoover’s incorporation, a ceremony will be held at City Hall to bury a time capsule.

Brocato has visited Hoover City Schools to obtain several items the student bodies from each school chose to include in the time capsule.

During the summer months, town hall gatherings will be held in local neighborhoods where Brocato and Hoover City Councilmembers will provide cake and ice cream celebrating Hoover’s anniversary.

Videos will be posted on the city’s Facebook fan page throughout the year featuring familiar faces that will talk about the history of Hoover.

Many details surrounding the 50th anniversary are still being coordinated.

In conjunction with the 50th anniversary kick-off event, the city also announced its participation in the Alabama Bicentennial that will continue through 2019.

PELHAM – The Pelham Library Guild’s Taste of Pelham event went off without a hitch on Tuesday, March 7, despite... read more