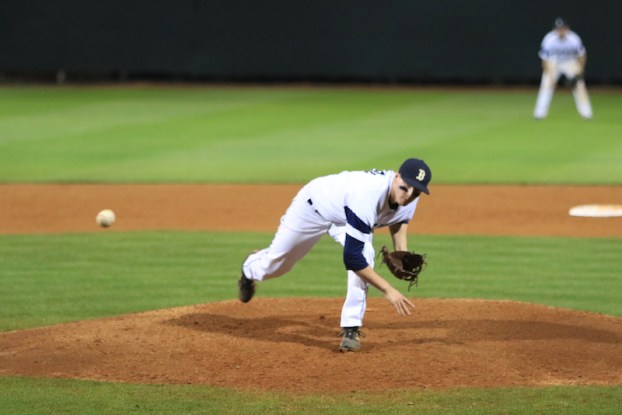 Briarwood’s pitching staff was the difference in their two wins over Chelsea, giving up just two combined runs and seven hits over the two nights. (For the Reporter/Dawn Harrison)

NORTH SHELBY – The brooms were out on Thursday, March 9, at Briarwood Christian School as the Lions completed a back-to-back night sweep of the Chelsea Hornets after a 3-1 win.

The two teams were originally supposed to play a Tuesday-Thursday series, but due to weather, game one was pushed to Wednesday night meaning the two would end up playing on back-to-back nights.

For much of the season it has been the Lions’ bats that have won them games having recorded 12 or more runs in all but two games coming into their two matchups with the Hornets, but it was their pitching that buckled down and carried Briarwood to victory this time around.

They were able to hold Chelsea (7-4) to a combined two runs and seven hits over the two-game stretch.

Briarwood (10-1) used a strong first inning and didn’t give up a run until the bottom of the final inning as they hung on to win game one 5-1.

The Lions did their first inning damage with only one hit, but scoring three runs. With one out in the inning, an error, a wild pitch and a walk put runners on the corner for Cole Steadman who singled to right field bringing in Hudson Hartsfield for the first run of the game.

Another wild pitch during Will Baumbach’s at bat moved two runners into scoring position before he was walked to load the bases. After a pop out, Logan Whittlesey and JR Tran-Reno were both hit by pitches, which with the bases loaded brought in one run apiece to give Briarwood a 3-0 lead after the top of the first.

Whittlesey got the start on the mound and was pure magic with his delivery. He had Chelsea’s batters confused the entire night and went into the final inning with a one-hit shutout intact. At that point, Briarwood had added a run in the top of the fifth and sixth to extend the lead to 5-0, giving him a cushion to work with.

After getting two outs and allowing one run on two hits in the inning, Kolby Kwarcinski came in to get the final out and preserve the 5-1 win. Whittlesey went 6.2 innings, allowing just three hits and one unearned run. He struck out 10 on the night while giving up just two walks as he picked up the win.

Steadman highlighted game one at the plate going 2-4 with one RBI and one run scored.

Game two was very similar as the two teams only combined for nine hits and five runs, but yet again it was Briarwood’s pitching that was the difference maker.

A different pitcher in Sam Strickland, but an almost identical outcome. Strickland held Chelsea in check through the first six innings as he was working on a two-hit shutout.

The Lions had built up another lead for their pitcher as a couple of errors by the Hornets and a Kwarcinsky RBI single had Briarwood up 3-0.

Just like in game one, Chelsea ruined the shutout as they started the top of the seventh with a double and a single. A strikeout and sac fly put two outs on the board, but brought home the Hornets’ first run of the game.

One pitch into the next at bat, Strickland was able to get a ground ball to second base that Sam Hamner tossed to first to end the game at 3-1.

Strickland went the distance allowing just four hits and one run while striking out eight and walking none.

Carson Eddy went 2-3 at the plate with one run scored, while Hartsfield went 1-3 with a triple, an RBI and a run scored.

Briarwood is now 10-1 on the season with their lone loss coming to Pelham. Chelsea moved to 7-4 after the two straight losses, but is a team to watch this year in 6A.

By GRAHAM BROOKS / Staff Writer CHELSEA–Both the Helena and Chelsea boys soccer teams wanted to get off to a... read more