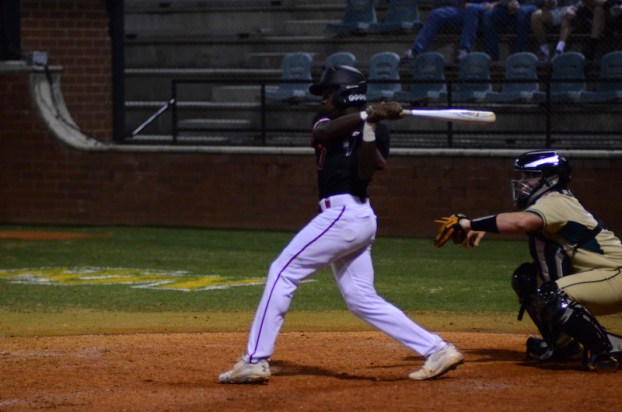 Myles Brown picks up a single during his second at bat of the night. He would go on to have three more including a three-run home run as he led the Warriors to an 11-5 win. (Reporter photo/Alec Etheredge)

Chris Megginson | For the Reporter

MOUNTAIN BROOK – Myles Brown led off the game with a double to left and never let up Thursday night to pace the Thompson Warriors in an 11-5 win at Mountain Brook High School.

Brown’s five hits against the Spartans, including a three-run homer in the seventh, give him seven consecutive hits in a six-day span to raise his batting average to .480 for the season. Thompson’s starting pitcher JC Parker and Breydon Edmonson each followed Brown’s lead with a 2-for-3 night at the plate.

The leadoff double in the first sparked a three-run inning for the Warriors. After Caleb Ragland walked and Parker executed a bunt single to load the bases, Chris Lewis singled in a pair and Josh Huner doubled in another.

Mountain Brook placed an unearned run on the board in the bottom of the third, but Thompson took it back in the fourth. Bryson Miller led off the inning with a walk, followed by a Brown single and Ragland bunt. Parker followed with a sacrifice fly to make it 4-1.

Miller and Brown singled back-to-back in the fifth to spark a two-run inning. Lewis was hit by a pitch and Huner hit a sac fly to center to plate the runs. Lewis finished with three RBIs in the game and Huner drove in two total.

The Warriors batted through the order in the seventh, adding five more runs, beginning with a leadoff double from pinch-hitter Austin Mims, who later scored on a wild pitch. Brown’s three-run home run to left followed, making it 10-1, and then a bases-loaded error scored another.

Parker gave up four runs in the bottom of the seventh with two outs. Mountain Brook’s Sam Jeffcoat and Thomas Graham singled in runs, followed by a pinch-hit, two-run double by Parker Garrison. Harrison White lined out to Jake Simonetti at third to end the game.

In all, nine Warriors collected a hit as Thompson hit .469 (15-of-32) off four Spartan pitchers. Thompson produced 23 base runners, including seven walks and one hit batter.

Parker (3-1) tossed a complete game for the Warriors to improve to 3-0 as a starter this season. He allowed seven hits and five runs, four earned, but struck out five and walked none.

Thompson (6-4) travels to Mobile for the weekend, taking on Mobile Christian and McGill-Toolen on Friday at 3:30 and 6:30 p.m., and then Spanish Fort and Daphne at noon and 2:30 p.m. on Saturday. The Warriors’ first cross-county matchups begin next week with a trip to Pelham on Tuesday night and a home game against Helena on Wednesday. First pitch is scheduled for 6:30 p.m. for both games.

By ALEC ETHEREDGE | Sports Editor Soccer tends to be one of the strongest sports in Shelby County and with... read more