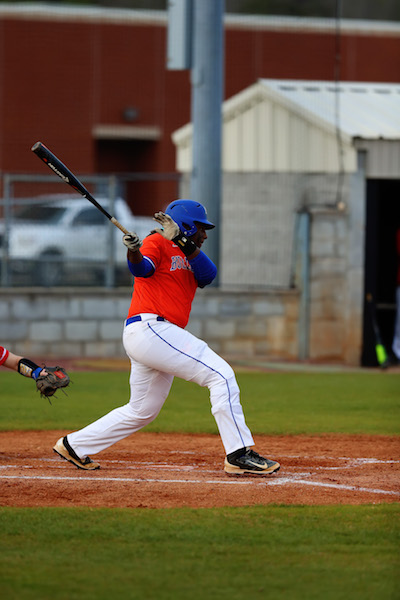 After trailing 5-2, Montevallo used seven unanswered runs over the final three innings to take down Jemison 9-5. (For the Reporter/Cari Dean)

JEMISON – Montevallo defeated the Jemison varsity baseball team on the road in a shocking seventh-inning comeback on Thursday, March 8. The Bulldogs chalked up five runs after striking out twice in the top of the seventh, then quickly sealed the deal in the bottom half with solid fielding, making the final score 9-5.

“Our guys never quit,” Montevallo coach Frankie Perez said. “Every coach’s dream is a group of guys that believe in each other and that they can come back against any team.”

Jemison took the lead early in the game, scoring all five runs in the first two innings. Austin Chapman of Jemison went 2-for-3 at the plate and was the most productive hitter of the night with five runs batted in.

After a few unproductive innings for Jemison and scores here and there by Montevallo, the score was 5-4 in Jemison’s favor going into the top of the seventh.

Pitcher Cameron Smith for Jemison came in hot at the start of the seventh and threw two consecutive strikeouts in his debut for the game. With two outs and trailing by one, Montevallo sent DaQwan Bryant to the plate.

Bryant broke the pitcher’s streak and hit a single. JD Birdsong was hit by a pitch and Zac Oden capitalized with a double that sent Bryant and Birdsong home.

Emotions were high as Montevallo took a one-point lead and Jemison was one out from putting a stop to the momentum that was building. Nick Thompson got to first with a walk and Ahmad Edwards stepped up to the plate.

Edwards smacked a ball dead between the left and center fielder, pushing Oden and Thompson home and getting himself around to third. Jackson Hughes brought Edwards home with a line drive double down the left baseline.

The next play, the Panthers slung a ball from third to first to get the out and take their chance to dig out of the fresh four-point deficit.

Jemison could not produce a run in their last inning due to Montevallo’s solid fielding. Endurance proved valuable to the Bulldogs as they closed out the game.