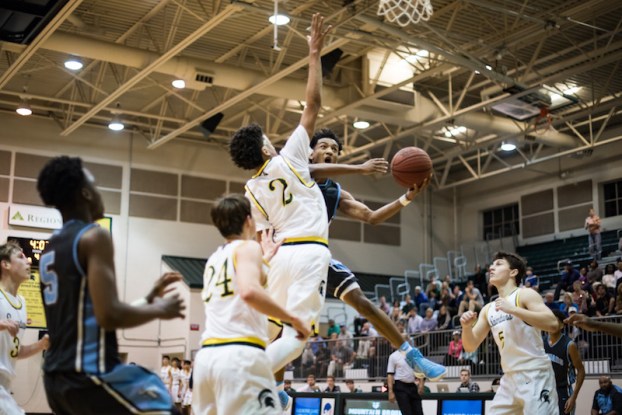 Jamal Johnson, pictured above making a layup over Trendon Watford, is one of 15 players to be named to the 2016-17 All-County team. (File)

It’s hard to believe that the 2016-17 basketball season has come to a close and with it, the end of the line for one of the strongest senior classes this county has ever seen. Each one of them played with a burning desire to end their season and high school career on a high note.

It was a strong season for almost every team this year as seven teams finished with a winning record, including six of which who finished with 20-plus wins. It was a particularly impressive year for Class 6A Area 8 as all three teams from the classification were ranked in the top 10 on a couple of occasions, including Pelham and Helena who at one point sat as the No. 1 and No. 2 teams in the state.

The Panthers went on to make a run to the Elite 8 where they lost by four to eventual state champion Paul Bryant. They were one of two teams to make a run to the Elite 8 as the Montevallo Bulldogs also pulled off the daunting task. The Bulldogs lost their game also to an eventual state champion in Midfield, but ended the season with a county-high 25 wins.

None of that team success would have been possible without a team of great players that cared about one another succeeding. There were several players that deserved recognition for their tremendous performances, and they have found their way onto one of our three All-County teams. To determine the order of each team, we looked at stats, level of competition, teamwork, the eye test and how important a player was to their team. I had the privilege of seeing each of these players throughout the year and was very impressed as they all were deserving of a spot. This week we will take a look at the boys team and next week the girls, so let’s dive in and check out who made the cut for the 2016-17 All-County teams.

Guard – Justin Allison, junior, Pelham. 19 points, 4.5 rebounds and 4 assists per game. A member of the third team last year, had a breakout season for Pelham moving him to the first team. With Alex Reese out with injury for part of the season, Allison went off for 25-plus points on several occasions. They wouldn’t have made it to the Elite 8 without him. Look out for this kid during his senior year. 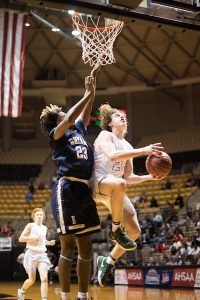 Pelham’s Justin Allison was one of the strongest point guards in the state this year.

Guard – Jamal Johnson, senior, Spain Park. 24.8 points, 7.1 rebounds, 2.7 assists and 1.1 blocks per game. This guy will be missed by the Jags, but not by opponents. With Austin Wiley gone, Johnson proved he could handle the load, leading SPHS to three wins over the No. 1, 2 and 3 teams. He is an unbelievable talent and will prove it at Memphis. 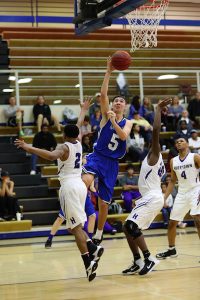 Joseph Lanzi set several school records during his senior season with the Hornets.

Forward – Joseph Lanzi, senior, Chelsea. 17.6 points, 3.7 rebounds and 2.1 assists per game. Not many words can describe this kid’s passion for the game, but it burns in him. Tied record for 3-pointers in a game, holds record for most wins by varsity player, most points per game, single season points and led Chelsea to most wins in school history. 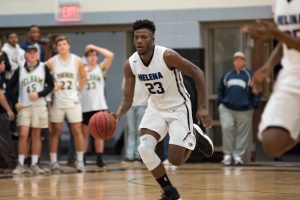 Forward – Jon Brown, senior, Helena. 17.8 points, 6.6 rebounds and 3.3 assists per game. Most impressive thing about Brown is the joy he gets out of the game, smiling nonstop. Being double or triple teamed he always found the open man or created a ridiculous shot. Led the Huskies to 23 wins this season and to a No. 2 ranking. 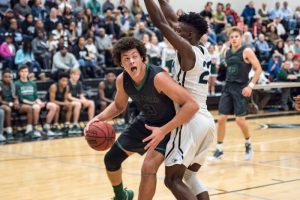 Pelham forward Alex Reese, pictured above making a post move on Jon Brown, was named as the Player of the Year.

Center – Alex Reese, senior, Pelham. 21 points, 10 rebounds and 1.5 blocks per game. Player of the Year in Shelby County for a reason. The team spent most of the year ranked No. 1 in 6A and narrowly lost, by four, to the eventual state champion in the Elite 8. Despite being double teamed and injured the entire year, he averaged a double-double. Alabama will get great use out of this young man.

Guard – Stephen Campbell, senior, Vincent. 21 points, 6.2 rebounds and 1.7 assists per game. Without Campbell, the Yellow Jackets were nowhere near a 20-win team, but he led them to 21 and was one of the best offensive players in the county. 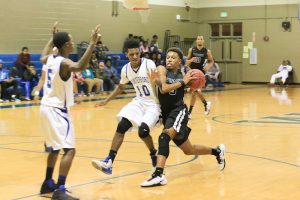 Vincent’s Stephen Campbell was one of the best offensive playmakers this year.

Guard – Tavarus Hall, senior, Montevallo. 15.4 points, 4.2 rebounds and 4 assists per game. Spent a chunk of the season only playing in 23 games, but his presence was necessary for their Elite 8 run. Shot 41 percent from 3-point and 47 percent from the field. 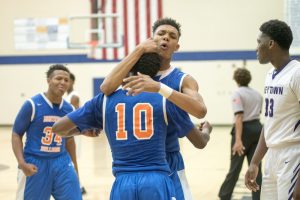 Montevallo’s Te’ Smith and Tavarus Hall (10), share a hug. Both were named to the second team after incredible seasons.

Forward – Brandon Green, senior, Shelby County. 14.6 points, 6 rebounds and 4 assists per game. His point average went up to 16.7 ppg in the second half of the season. A great player for several years and will be missed.

Forward – Yatil Gant, senior, Calera. 13.3 points and 8.3 rebounds per game. Sat out several games, but made the most of the ones he got to play in. The tallest and most athletic player for an Eagles team that ended up with 21 wins and spent most of the year in the 5A top 10. 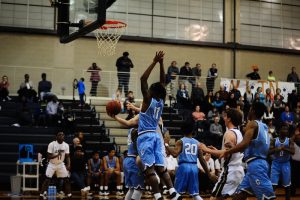 Forward – Te’ Smith, senior, Montevallo. 20.4 points, 8.1 rebounds, 5.1 assists and 2.1 blocks per game. An offensive nightmare for teams. He grew as a teammate throughout the year and into a great young man throughout his career. An integral part in their run to the Elite 8 and 25 wins. Shot 39 percent from three after taking 232 shots from beyond the arc. Came close to a quadruple double twice this season.

Guard – Drew Thomas, senior, Thompson. 13 points, 4 rebounds and 4 assists per game. Not the strongest year for Thomas or the Warriors as a team, but this kid is a baller. Had 364 total points and 112 rebounds and assists. 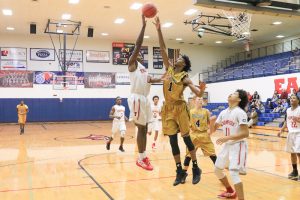 Guard – CJ Smith, sophomore, Calera. 13.2 points and 2.2 rebounds per game. Just a sophomore, Smith made his presence known. A big part of an offense that exploded for 80-plus points on several occasions.

Guard – Will Stephenson, senior, Oak Mountain. 13 points, 2.5 rebounds and 2.8 assists per game. Another one of those seniors that just cares and plays with a lot of passion. Shot 37.7 percent from three, and when he was feeling it there was no stopping him. 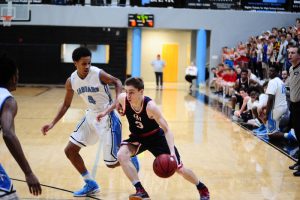 Will Stephenson has first team type talent and shot the lights out of the gym on several occasions.

Forward – TreShawn Brown, senior, Montevallo. 9 points, 9.7 rebounds and 1.7 assists per game. The third of three to make the All-County team as the Bulldogs’ athleticism showed off. One of the four on the team that could grab a double-double on any given night. 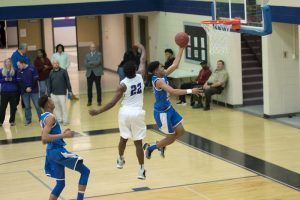 TreShawn Brown was the third Montevallo player named to the All-County team.

Forward – Michael Hiers, junior, Briarwood. 10.7 points, 4.3 rebounds and 1.7 assists per game. This last spot could have gone to one of three Briarwood players as Barrett Tindal and Carson Donnelly also had strong years, but Hiers turned up the heat late in the season with several monster games to keep the Lions’ season alive as they made their first postseason appearance since 2006. 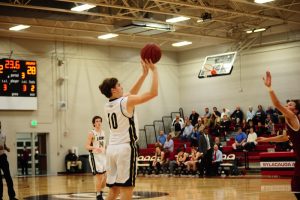 Briarwood’s Michael Hiers closed out the season strong and helped lead the Lions to their first playoff appearance since 2006.

FROM STAFF REPORTS MONTEVALLO–The College of Education at the University of Montevallo recently honored a number of alumni at a... read more