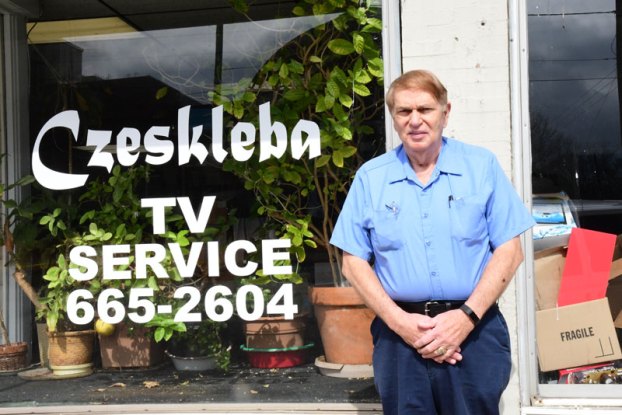 Walt Czeskleba has been doing business in Montevallo for 45 years as a TV and electronics repairman.(Photo by Steven Calhoun)

Walt Czeskleba has owned and operated Czeskleba TV Service in Montevallo for 45 years.

Czeskleba opened the store in February of 1972 in the back part of what is now Barnes and Noble on Main Street. He moved the store to its current location in 1975 and has been fixing televisions and other gadgets ever since.

“When I started out it was mostly black and white TVs, when I was 15 years old,” Czeskleba said. “Only rich folks had the few color TVs.”

Czeskleba said he has learned about new electronics ever since he opened. The store is full of parts and things in repair. Czeskleba works at a table in the back with a set of tools designed for repairing and diagnosing problems with electronics.

“I have to study all the time on the new stuff. That’s the thing, keeping up with new technology,” Czeskleba said.

The experienced repairman has bought parts from other stores that were closing so he would have whatever he needed to fix vintage electronics, which he claimed is a unique service he offers.

“I do a lot of vintage, old model stuff now for old radios, record players, stereos and stuff like that because nobody around works on that any more, but that’s what I cut my teeth on,” Czeskleba.

Czeskleba said TV shops are disappearing. He had as many as five employees before. Now, he works alone on most days.

“Back in the day, I was just busy, busy, busy,” Czeskleba said. “But those days are gone.”

Czeskleba’s brother, Ed, helps him on Mondays. Czeskleba plans to continue offering his services to Montevallo and the surrounding areas. He said he frequently gets customers from as far as Selma and Hoover.

“I’m going to stay here as long as I can work,” Czeskleba said. “They can’t [get repairs] anywhere else; there ain’t nowhere else to go. I don’t charge for just a checkout, that’s why I get a lot of stuff in here.”

Czeskleba said he charges for repairs, but would never charge for a quick look to find the problem with what the customer brings him.