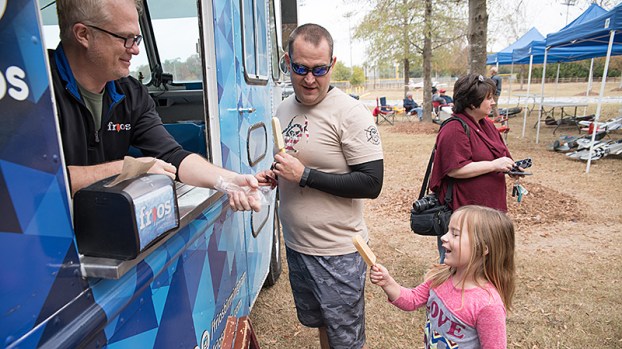 Several area food trucks will gather at Alabaster’s Veterans Park on May 13 for a festival benefiting the Alabaster City Schools Sister Schools program. The day also will feature a 5K and fun run. (Reporter Photo/Keith McCoy)

ALABASTER – The Alabaster City Schools Sister Schools project is looking to give locals a chance to enjoy a spring day at the park while supporting the community’s ongoing efforts to partner with a town in Honduras.

The Sister Schools project will be hosting its annual “Hoofin’ it for Honduras” 5K on May 13 beginning at 9 a.m. at Veterans Park off Alabama 119, and also will be adding a food truck festival from 10:30 a.m.-6 p.m.

To register for either of the races, visit Runsignup.com/race/AL/Alabaster/Hoofinitforhonduras. Advance registration is $25 for the 5K and $10 for the kids’ one-mile fun run, but prices will increase after 9 p.m. on May 12.

New this year will be the food truck festival after the 5K, which will feature several area trucks offering everything from cupcakes to barbecue.

“We tried to get a lot of different food trucks, but not have a lot of trucks offering the same thing,” Jackson said. “We asked the community which trucks they’d like to see out there, and then reached out to those trucks.”

As of March 13, the festival had secured the following trucks:

The food truck rally is free to attend, and 10 percent of all purchases will be donated to the Sister Schools project.

Through the Sister Schools project, ACS has partnered with Jutiapa, Honduras, over the last few years, and has made multiple trips to Central America to complete upgrades ranging from a new medical clinic to a water purification system.

This year, ACS students and teachers will return to Honduras from June 11-18 with the primary goal of constructing a new classroom for the town’s school.

For more information about the 5K and Food Truck Festival, visit Facebook.com/acssisterschools.