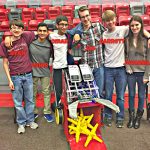 The students competed against the top 50 teams in the state and won the final match 46-6, as well as clinching the first place title in the skills competition.

VEX Robotics is a competition that centers around a game, according to Hughes.

This year, the game “starstruck” is played on a 12×12 square field, where two alliances, one “red” and one “blue,” composed of two teams, compete in matches consisting of a 15-second period, followed by one minute and 45 seconds of driver-controlled play.

The object of the game is to attain a higher score than the opposing alliance by scoring stars and cubes in a particular zone and by hanging robots on the hanging bar.

Hughes said the students that won the competition had to compete in six different rounds with each round resulting in a ranking.

“At the end of these rounds, the top eight teams got to choose an alliance,” Hughes said. “That meant they selected two other teams from the field to compete with them in the finals. The students then competed in a double elimination round to see who was left standing, and our student won the final match 46-6.”

Now, the students have earned a spot to compete at WORLDS, which is being held in Louisville, Ky. April 19-22.

Hughes said the seven students that qualified for WORLDS are currently raising funds for the trip.

A GoFundMe.com page has been set up for the team with an overall goal of $4,018 for the trip, which includes hotel rooms, registration for the event and travel expenses.

“We are going to be competing with 540 teams from around the world,” Hughes said. “Our pit mates are from China. The game is the same, but the competition will be on an entirely different level.”

“I am so proud of this group,” Hughes said. “I know how hard they have worked and how dedicated, motivated and focused they are. They have very high expectations for themselves. They expect to win WORLDS, and I have no doubt that they can, but more importantly, they understand the meaning of team and work together to accomplish their goals.”

For more information about the competition or to contribute to the students WORLDS competition journey, visit GoFundMe.com/worlds-robotics-competition-omhs.